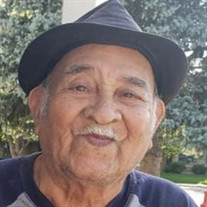 Alfonso Lujan Jr, 89, of Greeley, went to be with The Lord with his family by his side at Northern Colorado Medical Center in Greeley, Colorado on February 17, 2021. “Junior” was born in Greeley, Colorado to Alfonso & Maggie Lujan on June 12, 1931. He was a hardworking man who worked with the Weld County Sheriff’s Department in the 1950’s. He was deeply passionate about protecting our community, and eventually worked for Orozco Security on the weekends as a security guard until 1985. Junior was a leader in the community so much that many will never forget seeing him in his security uniform. Junior did not know any stranger. He was well known everywhere he went. His unique puckered smile would light up any room. He adored all his children and would do anything for them. He had great compassion towards all animals. He would not hesitate relocating animals to the family farm just to keep them safe. Junior loved walking and collecting many different things. He liked to share his past with anyone who would listen. Junior would take his chances on his luck, so he enjoyed playing scratch tickets and bingo. He will be forever remembered as being the best dad ever! He will be never forgotten, and he will live in our hearts forever. Junior is survived by his beloved son’s and daughter’s; Larry (Annie Harding) Lujan, Tommy (Linda) Lujan, Rudy (Yvette) Lujan, Diana (John) Lujan-Maldonado, Debbie (Robert) Segura, Sandra (Tony) Laleh, Bonnie (Ray) Lujan Flores, Brenda (Gilbert) Hernandez, Amanda (Lucas) Archuleta. Junior is also survived by numerous grandchildren, great-grandchildren, and a great-great grandchild and a large loving extended family that came along with his partner for many years until he went to be with The Lord Mary Rodriguez. He is Proceeded in death by his parents, his brothers; Benjamin, Alkie, Lupe, Mike and Jerry, his sisters; Ann & Mary, his grandsons; Leon, Isaac, and granddaughter Jamie.

The family of Alfonso Lujan Jr. created this Life Tributes page to make it easy to share your memories.

Send flowers to the Lujan family.