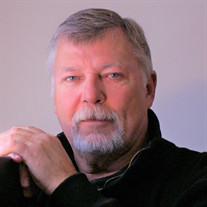 Allen “Big Al” Dhooge, 68, of Evans, passed away on Wednesday, September 19, 2018 at his home. He was born January 13, 1950 in Greeley, Colorado to Fred & Margaret (Burkey) Dhooge. Allen was a graduate of Central High School and went on to work with Noffsinger as an engineer for 44 years before retiring as the plant manager. Allen enjoyed ATVing in the mountains, and other outdoor activities including fishing, photography, and camping. He liked working with his hands and did woodworking in his spare time. He also loved flying drones and traveling. Allen was a loving father, grandfather, brother, son, friend, neighbor, and co-worker. He was a man of integrity with an unmatched work ethic. He lived like he was dying, living life to the fullest. He was dearly loved and will be dearly missed. He is survived by his daughters, Nikol (Tracy) Todd of Windsor, Colorado, Kelly (Matt) Chandler of Windsor, Colorado, and Alyssa Dhooge of Gilcrest, Colorado, his brothers, Vern Kremer and Alfred Dhooge, a sister, Jeanette Kremer, 9 grandchildren, and 1 great-grandchild. He was preceded in death by his parents, Fred & Margaret Dhooge and several brothers and sisters. A celebration of Allen’s life will be held at 10:00 a.m. on Saturday, September 22, 2018 at the Moser Funeral Service Chapel, 3501 S. 11th Avenue, Evans, CO. An online guestbook and obituary are available at www.moserfuneralservice.com.

The family of Allen Roy Dhooge created this Life Tributes page to make it easy to share your memories.

Send flowers to the Dhooge family.