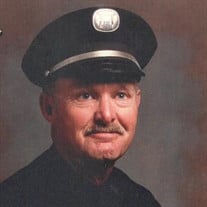 Al Lorett, 93, of Greeley, passed away peacefully on Monday, June 7, 2021 at Grace Point Senior Care. He was born February 12, 1928 to Joseph R and Ethel (Peters) Lorett in Denver, Colorado. He attended South High School until 1946 where he then enlisted in the U.S. Navy. He was honorably discharged in 1947. He then enlisted in the Marine Corps Reserve (1950-1952). He married his high school sweetheart, Jennie Lou Lerch on February 1, 1946. After returning to Denver, Al went on to become a Denver Fireman, where he retired as a Captain after 28 years of service. Al was a true Colorado native where in his youth he spent time at the family cabin near Evergreen. Later he worked for the U.S. Forest Service. He had extensive knowledge of the Colorado wilderness, he knew all the names of the peaks, trees, animals, and flowers. He spent much of his life hiking, mountain climbing, backpacking and skiing. He was a Boy Scout leader, a member of the Colorado Mountain Club and served with the National Ski Patrol. After his retirement Al and Jenny lived in Eaton, Estes Park and Greeley. Together they enjoyed many years of traveling and golfing, being long time members of the Eaton CC and the Estes Park CC. Al spent several years of retirement as a school bus driver for the Eaton school district and on Fridays he enjoyed passing out candy bars to the kids on his route. His hobbies included reading and studying Colorado and Native American history, oil painting, woodworking and listening to western music. He was a loyal Denver Bronco fan and also enjoyed watching golf, the Colorado Avalanche and the Rockies. You never saw Al without his Rockies baseball hat. Al was a lifelong member of the Episcopal Church, serving on the vestry at Trinity Episcopal Church in Greeley. He was a Freemason 32nd Degree. He was most proud of his family and 60 year marriage to the love of his life Jennie Lou. Al was a true gentleman and friend to all who knew him. Survivors include a son Bob and his wife Cindy Lorett of Greeley, a daughter Debbie and her husband Ken Bell of Eaton; 4 granddaughters and their husbands, Nicole and Phil Tahmindjis of Larkspur, Janelle Lorett of Littleton, Emily and Joey Haythorn of Eaton, Caitlin Murphy of McCook, NE; a grandson and his wife, Blake and Rachael Bell of Severance; 13 great-grandchildren. He is preceded in death by his parents, 1 sister, 2 brothers, and his wife. A private family service will be held and his urn will be interred in Trinity Episcopal Church Memorial Garden. Memorial Gifts may be made in Al’s name to the Wildland Firefighter Foundation and the Restoring Colorado’s Forest Fund which held a special place in his heart.

Al Lorett, 93, of Greeley, passed away peacefully on Monday, June 7, 2021 at Grace Point Senior Care. He was born February 12, 1928 to Joseph R and Ethel (Peters) Lorett in Denver, Colorado. He attended South High School until 1946 where he... View Obituary & Service Information

The family of Alvin Lincoln Lorett created this Life Tributes page to make it easy to share your memories.

Al Lorett, 93, of Greeley, passed away peacefully on Monday,...

Send flowers to the Lorett family.