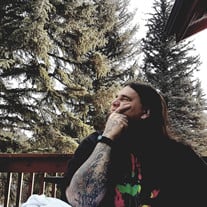 Benjamin Chad Turner, 43, of Greeley, passed away on Sunday, January 5, 2020 at his home. He was born April 5, 1976 to Randy Steven Turner & Lorri Ann (Piazza) Todd in Salt Lake City, Utah. On October 31, 2018, he married Mica Meriah Osborn in Greeley. He was self employed with multiple businesses. His passion was for glass blowing. He enjoyed music, motorcycles and making people laugh. Anyone in need was welcomed by him with open arms. He was always there to help. Benjamin is survived by his wife, Mica Turner of Greeley, his father, Randy Turner of Evanston, Wyoming, his mother, Lorri Todd of Salt Lake City, Utah, sons, Echo Lee Turner and Andrew Alden both of Greeley, daughters, Randee and Miricle Turner, Nevaeh Arbuckle, and Alyssa Liming, all of Greeley, a brother, Lucas Nicholson of Evanston, Wyoming, and sisters, Rachel Hughes of Phoenix, Arizona, Krina Turner of Seattle, Washington, Abbie Turner of Evanston, Wyoming, and Brittney Hansen of Roy, Utah. He is preceded by his brother, Nicholas Levi Hall, a daughter, Maryjane Turner, a son Benjamin Chad Turner, Jr. and a grandpa, James Delbert Turner. Visitation will be from 9:00 a.m. to 12:00 p.m. on Saturday, January 11, 2020 at the Moser Funeral Service Chapel, 3501 S. 11th Avenue in Evans. In lieu of flowers, donations may be made to Mica Turner in care of Moser’s for the children’s education.

The family of Benjamin Chad Turner created this Life Tributes page to make it easy to share your memories.

Benjamin Chad Turner, 43, of Greeley, passed away on Sunday,...

Send flowers to the Turner family.