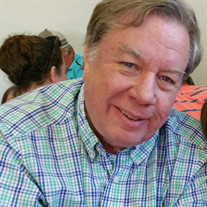 Bennie (Ben) Janssen, born September 23, 1955, entered eternal rest Wednesday, March 3, 2021 at 11:28 p.m. He graduated with the Class of 1973 from Highland High School in Ault, CO. Ben was an accountant, commodity broker, farmer, business owner and held the position of Chief Bellyacher at Big Belly Farms. Ben was a man of many words and interests, constantly extending his school of thought. In his mid-teens he bought a CB radio which evolved into getting his ham radio license and even owning his own CB radio shop in Greeley. He was also the Weld County Airport maintenance supervisor, an electrician, agricultural magnate, and co-owner of the Bison Breath Bar in Ault. He spearheaded bringing fireworks to the Ault Fall Festival and piloted airplanes. He was a lifelong learner, seeking out ways to learn more. Ben is survived by his wife Charity Dowdell, Father Bill Janssen, brothers Dale (Cindy) Janssen, Mark (Tina) Janssen and David (Melonie) Janssen, his cousins and many nieces and nephews. He was proceeded in death by his mother Betty (Landis) Janssen. The family would like to express their appreciation for the kindness and well wishes shown them during this difficult time. A Celebration of Life will be held at Baier Family Funeral Home in Buckley, IL on Thursday, March 11, 2021 at 11 a.m. Immediately following, he will be laid to rest in Woodland Cemetery, Buckley, IL In lieu of flowers, memorial gifts may be sent to The Ault Fall Festival, PO Box 574, Ault, CO 80610 to be used for the 2021 fireworks display.

The family of Bennie Jon Janssen created this Life Tributes page to make it easy to share your memories.

Send flowers to the Janssen family.