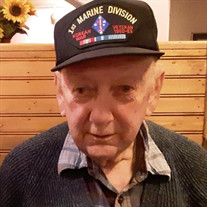 Bernard “Bucky” Walters, 90 of Greeley, was born May 17, 1930 in Burket, Indiana and passed away early Saturday January 23, 2021 in Greeley. He moved to Stratford, Texas with his mother when he was 8 years old. There he was an accomplished baseball and basketball athlete. He is a veteran of the Marine Corps and served as a forward observer during the Korean War. He attended Panhandle A & M in Goodwell, Oklahoma, where he met the love of his life Anna Carol Burton. They were married May 25, 1956 in Cimarron County, Oklahoma and his greatest love was his family. He is survived by his wife Anna Carol of Greeley and children Mark (and Viktoriya) of Woodbridge, Virginia, and Lisa of Greeley. Further survived by nieces, nephews, and friends. Bucky will be fondly remembered as a loving father, amateur author and artist, humorist, big band music lover, genealogy researcher, proud patriot, and US Marine Corps veteran. He is preceded in death by his parents Leonard Edgar and Blanche Mae (Yates) Walters, brothers Leonard, Hubert, Robert and Delbert and sister Marguerite. After cremation he will be buried in Boise City, Oklahoma cemetery. In lieu of flowers contributions can be made to Evans United Methodist Church 602 39th Street, Evans CO 80620. Semper Fidelis

The family of Bernard "Bucky" Walters created this Life Tributes page to make it easy to share your memories.

Send flowers to the Walters family.