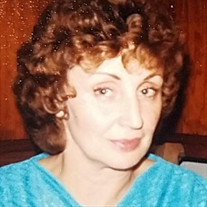 Betty Lou Knespel was born August 7, 1937, in Greeley, Colorado, where she lived most of her life. She passed peacefully on January 18, 2022, at Fairacres Manor. She was born to Emil and Betty Knespel. She had one brother, Jerry, and one sister, Bonnie Sue. Betty Lou grew up in the Weld County/greater area. She attended school in LaSalle and ultimately decided to stay home to help care for her sister. Betty Lou married Jim Hart in her late teens and together they had Jimmy, Danny, and Kathy. Later she married Ken Hundley and together they had Jerry. Betty Lou is remembered to have always loved working with the public and staying busy to help provide for her family. She adored her relationships with many, touching so many different lives, as we have heard through condolences, many referring to her as ‘Mama Lou.’ You didn’t dare call her Betty, though, always Betty Lou. She would make darn sure of that. She retired from King Soopers after working there for 10 years. Upon retiring, she enjoyed getting together with her friends, ‘the group,’ for luncheons or a social outing. She enjoyed watching game shows and horse racing, reading novels and The Bible, while treating herself to some chocolate! She also enjoyed listening to music, especially the 40’s era and gospel, as well as Elvis Presley and Willie Nelson (even attending his concert at Red Rocks in her mid 60’s!). She adored her grandchildren and was always up for playing a game of Uno. “Lucky blue, 7” she’d say as she threw down the card and darned if she wouldn’t usually win. Her grandkids have fond memories of her smile, her big hugs, her gentle touch, how intently and lovingly she would look at and listen to you, her in her muumuus, some good ol’ downhome cooking, her love of birds, and her relationship with the Lord. She blessed her family and many others with her prayers, notes, love, and care. When asked how she was, she would often respond with, “As fine as frog’s hair!” and when dealing with life, “It is what it is.” It was never “goodbye,” but always, “later.” She will be dearly missed by so many. Betty Lou is preceded in death by her son, Jimmy, her son, Danny, her parents and both her siblings. She is survived by her daughter, Kathy (Bobby) Wardlaw, and son, Jerry (De Anna) Hundley, 11 grandchildren, 7 great-grandchildren, and 1 great-great-grandchild, 2 nieces and 1 nephew. A private memorial will be held with immediate family at a later date. Memorial contributions can be made to the Denver Rescue Mission (PO Box 5206, Denver CO 80217), a non-profit organization that Betty Lou was in support of.

Betty Lou Knespel was born August 7, 1937, in Greeley, Colorado, where she lived most of her life. She passed peacefully on January 18, 2022, at Fairacres Manor. She was born to Emil and Betty Knespel. She had one brother, Jerry, and one sister,... View Obituary & Service Information

The family of Betty Lou Knespel created this Life Tributes page to make it easy to share your memories.

Send flowers to the Knespel family.