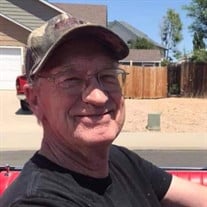 Byron Lee Bowman, 73, of Greeley, CO, died on Monday, June 3rd, at the University of Colorado Hospital in Aurora, CO, following complications from an aortic dissection. Byron was born on August 21, 1945, in Hallock, MN, to Glen and Violet (Jacobson) Bowman. He graduated from Kennedy High School in 1963 and spent a couple of years playing sports in college. He enlisted in the United States Army in 1965, was stationed in Fort Richardson, AK, and honorably discharged in 1968. He married Janis Marie (Howe) on July 3, 1971, and they made their home in Kennedy, MN, until they moved to Greeley, CO, in 2003. Byron farmed with his family for many years, owned and operated a water purification company (Bowman Industries), and retired from D & D Commodities (Greeley Plant) in 2015. Byron enjoyed baseball, basketball, football, curling, bowling, and skiing. He also enjoyed snowmobiling, fishing, hunting, camping, and spending time with his family. Byron was a loving, devoted husband, father, and grandfather. He will be sadly missed, but lovingly remembered by his family and friends. Survivors include his wife Janis Bowman of Greeley, CO; his daughter Kari (John) Biesendorfer of Westminster, CO; sons Jason and Jeremy Bowman of Greeley, CO; brother Brent (Jody) Bowman and sister Beth (Robert) Gatheridge both of Kennedy, MN; and granddaughters Zorah Biesendorfer and Vail Bowman. He was preceded in death by his parents Glen and Violet Bowman and his sisters Bonnie Tyszelman and Barb Johnson. A visitation and viewing will be held at Moser Funeral Service (3501 S. 11th Ave., Evans, CO, 80620) on Wednesday, June 12th, from 4:00-7:00 pm. The funeral will be held at Maria Lutheran Church (401 W. County Road 7, Kennedy, MN, 56733) time and date to be determined, the service will be followed by a veteran’s committal at the Kennedy City Cemetery and a reception at Maria Lutheran Church. In lieu of flowers or gifts, memorial contributions can be made to the Byron Bowman Memorial Fund and sent in care of Moser Funeral Service, 3501 S. 11th Ave., Evans, CO, 80620.

Byron Lee Bowman, 73, of Greeley, CO, died on Monday, June 3rd, at the University of Colorado Hospital in Aurora, CO, following complications from an aortic dissection. Byron was born on August 21, 1945, in Hallock, MN, to Glen and Violet... View Obituary & Service Information

The family of Byron Lee Bowman created this Life Tributes page to make it easy to share your memories.

Send flowers to the Bowman family.