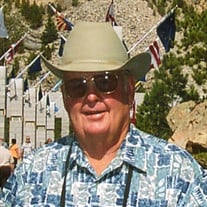 Carl A. Benson, 93, of Eaton, passed away when he was ready Friday, January 26, 2018 at North Colorado Medical Center. Born January 29, 1924 to A.V. and Esther (Rapp) Benson. He graduated from Greeley High School in 1942. February 2, 1945 he enlisted in the Army where he served as a Construction Foreman in Okinawa and Kobe, Japan. He was honorably discharged as a Tech4 Sargent December 1, 1946. He wed Phyllis A. Tormey on September 7, 1947 in Denver, Colorado. They raised four children whom they taught the value of hard work, honesty, and love. Carl was a man of grit, with diverse knowledge, and many skills. He devoted his life to the agricultural industry. He grew up on the family farm, trained horse teams and herded cattle with his brother in their early teens. After WWII he returned to farming, went into agricultural financing, sales of farm implements, back to farming and livestock (but never horses). He went into agricultural lending at the Eaton Bank where he helped farmers with financing, budgeting, and saving their farms. He later drove big rigs, both long and short hauls. At 84, Carl retired so he could indulge in golfing, reading, spending time with friends and family. He never stopped learning. On his last day of life, he set a tee time with friends followed by drinks at the clubhouse. Then a nice dinner at home, with his wife and Rusty. Member of Immanuel Lutheran Church, Eaton Country Club, American Legion, Eaton Lions Club, and Life Member of the V.F.W. Post #2121. He was predeceased by his wife; a son, Kurt Benson; his parents; two sisters and two brothers; Agnes Hawley, Sonja, Kenneth, and Edwin Benson. Survivors include his sisters Violet (Clarence) Carlson and Shirley Ulrich; daughters Kaye (Blair) Warehime of Mesa, Arizona; Karen (Norbert) Vazquez of Pasadena, California; Kim (Bill) Gribble of Houston, Texas; grandchildren, Kasey, Kyle Benson and Katie (Staff Sargent Josh) Higgins; Dan, Ben, Aaron (Kelly) Warehime; Shirley Vazquez; and LCPL Charles Gribble, IV; Kira Higgins, first great granddaughter, many nieces and nephews. A memorial service to celebrate Carl’s life will be held at Moser Funeral Service Chapel February 17, 2018 at 10:00 a.m. Inurnment at Eaton Cemetery at a later date. In lieu of flowers, donations may be made in memory of Carl to The Building Fund at Immanuel Lutheran Church.

The family of Carl A. Benson created this Life Tributes page to make it easy to share your memories.

Send flowers to the Benson family.