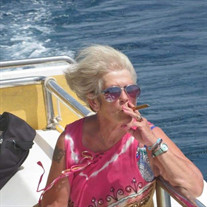 Carla Jodene Anderson Moser, 74 of LaSalle, Colorado, beloved mother, grandmother, sister and friend passed away at her home November 30, 2019. She was born July 13, 1945 in Greeley, Colorado to Robert C. “Bob” & Erma E. (Connell) Anderson. Carla attended La Salle Elementary, La Salle High School, and graduated from Valley High School in 1963 where she was active in many student organizations including band and German band. Carla married Vern Moser in 1964 and lived and farmed in the La Salle/Bee Bee Draw area. They had a daughter, Melissa born in 1965 followed by a son, Mark in 1967. After 22 years of living and working on the farm, Carla and Vern divorced in 1986. This is when she moved into the town of La Salle. In 1989 Carla entered business with lifelong friend Joan Brehon. They owned and operated C&J Deli located at 522 5th Avenue in Greeley until 2003 serving delicious krautburgers, hamburgers, various German foods and desserts. In 2003 she became a substitute teacher and continued to do so (with her whistle in hand) at Valley, Platte Valley, and Roosevelt Schools until her retirement due to health Issues in 2017. Carla never met a stranger and enjoyed spending time with family and friends at the family cabin in Glen Haven, Co. She loved spending time at her church, bible study, playing cards with her friends, and all the ladies get togethers. She especially loved spending time with all her children, grandchildren and great grandson. Whether it be a school function or sporting event she always made time for family and never missed an important family event. Carla was preceded in death by her grandparents, Tom and Dora Connell of La Salle, parents, Robert C. and Erma E. Anderson of La Salle and numerous aunts and uncles. She is survived by a brother Robert C. “Andy” Anderson, Jr. of Greeley; daughter Melissa Mijares and son in-law Ronald of Glen Haven; son Mark Moser and daughter in-law Brenda of La Salle; grandchildren, Cayla Chacon of Loveland, Brandi Habighorst and husband Josiah Habighorst of La Salle, Coree Chacon of Greeley, Tanner 'Doc' Moser of La Salle, Jared Mijares of La Salle, Micah Mijares of North Platte, NE, and Nakiya Myrant-Mijares of Colorado Springs; great grandson, Kaceton Habighorst; niece, Heidi Korpella; nephew, Jason Anderson and their families. A memorial service to celebrate Carla’s life will be held at 10:00 a.m. on Saturday, December 7, 2019 at the First Presbyterian Church of La Salle, 51 Church Ct. in LaSalle followed by a light meal and reception at La Salle Fire Station 118 Main Street in LaSalle. In lieu of flowers, memorial contributions can be made to LaSalle First Presbyterian Church at 51 Church Ct. LaSalle, CO 80645.

The family of Carla Jodene Moser created this Life Tributes page to make it easy to share your memories.

Send flowers to the Moser family.