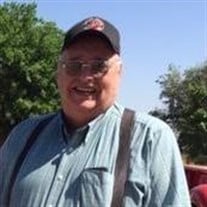 Charles Hugh Baird, 69, passed away early Thursday morning, October 18, 2018 at his home. He was surrounded by his loving wife, Sharon, his daughter Tammie, son-in-law, Ren Merry and his two granddaughters. He was born on September 26, 1949 in Beach, North Dakota, to Ralph and Olive Baird of Wibaux, Montana. He attended Hay Creek country school and Wibaux County High School. While attending school, he also worked on his uncle’s farm, which he truly loved. In 1970, Charles enlisted in the Marines and also married Sharon Bonner in December of that year. Charles enjoyed any job that involved a truck or tractor and became a long-distance owner-operator. He had the privilege of hauling loads through each of the lower 48 states as well as four provinces in Canada. Upon his retirement, he became an activity school bus driver for the Wibaux County schools. In September of 2017, Charles and Sharon moved to Greeley, Colorado, to live with their daughter and her family. Charles loved interacting with the school students while driving bus. He delighted in “pulling pranks” and loved to laugh. In the past year he began doing puzzles. He was very proud of his grandkids. He will be remembered by friends and family as a hard-working, honest man who loved the Lord and his family. Charles was a member of Wibaux Bible Church for most of his adult life. Since moving to Colorado, he attended Grace Church. He is survived by his wife, Sharon Baird, daughter Tammie (Renthungo) Merry, grandchildren Sgt. Nathan Merry, Areni Merry, Therali Merry; brother, Wayne (Gloria) Baird, and three sisters, Bonnie (d. Steve) Wicka, Roberta (Allen) Allerdings, and Jonny (Charlie) Victor and one niece and four nephews. He was preceded in death by his parents, Ralph and Olive Baird and older sister Charlene Baird. A memorial service is planned for Wednesday, October 24, at 1:00 pm at Grace Church in Greeley, Colorado. A memorial service in Wibaux, Montana, will be at a later date.

Charles Hugh Baird, 69, passed away early Thursday morning, October 18, 2018 at his home. He was surrounded by his loving wife, Sharon, his daughter Tammie, son-in-law, Ren Merry and his two granddaughters. He was born on September 26, 1949... View Obituary & Service Information

The family of Charles Hugh Baird created this Life Tributes page to make it easy to share your memories.

Send flowers to the Baird family.