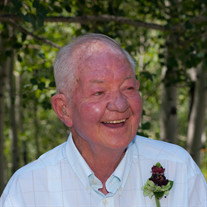 Charles “Chuck” Burman was born in Denver, Colorado to Raymond Luther Burman and Rita Alice Burman (Young). He moved to Ault with his family at 2 years old. Chuck attended Ault schools through the 11th grade, and he graduated high school from Wentworth Military Academy in Lexington, Missouri. He then earned a degree in Economics from Colorado A&M (now CSU). In 1950 Chuck was called to military service, and he served 2 years in the Army, completing a tour in Korea. He earned a bronze star for heroic achievement and was honorably discharged with the rank of Lieutenant Colonel. After serving in the military, Chuck spent more than 50 years running the family business, Burman’s Clothing, which had been open since 1904. Chuck was a prominent member of the Ault community, helping to establish the Ault Pierce Fire Department and the Ault library board. He was also a member of the Lion’s Club, VFW, and town board. In his spare time, Chuck enjoyed fly fishing, trap shooting, tennis, and American history. Chuck and Burman’s Clothing were central to the Ault community. With the doors always open and a strong pot of coffee brewing, Burman’s was the place to go for good conversation or help with a problem. Chuck is survived by his grandchildren, Chadrick Burman, Douglas Burman, and Anna Burr (Burman); stepson Scott Huff; great-grandson Cale Burman; great-granddaughters Laurel and Nola Burr; grandchildren Tyler Huff, Dakota Beckwith and Jessie Beckwith; great-grandchildren Bentley Beckwith and Nolan Beckwith. He is preceded in death by his parents Raymond and Rita Burman; a sister, Barbara Louise Stuckert; his sons David and Douglas Paul Burman; his wife Deana Burman (Huff); his ex-wife Anna Lee Burman (Andersen); and his ex-wife Margaret Burman. Memorial service will be held on Wednesday, November 15, 2017 at 10:00 at First Lutheran Church, 402 Graefe Avenue. Interment at 11:00 at Eaton Cemetery. Luncheon at 12:00 at the Ault VFW. Memorial donations may be made to the Ault Fire Department.

Charles &#8220;Chuck&#8221; Burman was born in Denver, Colorado to Raymond Luther Burman and Rita Alice Burman (Young). He moved to Ault with his family at 2 years old. Chuck attended Ault schools through the 11th grade, and he graduated high... View Obituary & Service Information

The family of Charles Raymond Burman created this Life Tributes page to make it easy to share your memories.

Charles “Chuck” Burman was born in Denver, Colorado to Raymond...

Send flowers to the Burman family.