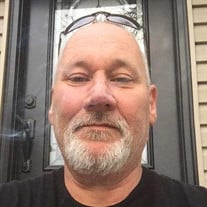 Charles “Chuck” Robert Conaway, 51, of Evans passed away on Sunday August 12, 2018 at Pathways Hospice Care Center in Loveland. He was born December 28, 1966 in Brawley, California to Gary Clarence & Darlene (Whitt) Conaway. He attended Brawley High School and went on to work for the Holly Sugar Co. in Brawley where he worked for many years. After moving to Colorado, he worked for All American Pet Proteins which he loved along with riding his Harley and shooting his guns. He is survived by his daughters, Brianna G. Conaway and Kala Nicole Duggins of Evans, Tiffany Messmer of SanTan Valley, Arizona, and Candice Houx of Iowa, his sons, Timothy Duggins of Evans, Bobby Watkins and Michael Eaton both of SanTan Valley, Arizona, a brother, Doug Conaway of Brawley, California, a sister of Susan Conaway Sweetwood of El Cajon, California, 9 grandchildren, his ex-wife, Rebekah Jameson, and numerous nieces, nephews and cousins. He is also survived by Big Blue, his beloved Harley Davidson Edition Ford F-350. He was preceded in death by his parents, Gary & Darlene Conaway. A celebration of Chuck’s life will be 10:00 a.m. Saturday, August 25, 2018 at the Moser Funeral Service Chapel, 3501 S. 11th Avenue, in Evans.

The family of Charles "Chuck" Robert Conaway created this Life Tributes page to make it easy to share your memories.

Charles “Chuck” Robert Conaway, 51, of Evans passed away on Sunday...

Send flowers to the Conaway family.