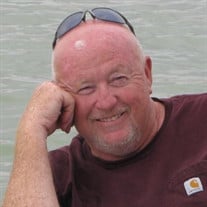 Chris Arthur “Cramps” Grable of Eaton, CO passed away on September 20, 2021, at UC Health Anschutz Medical Campus in Aurora, CO from heart failure. He was surrounded by his beloved wife and twin boys at his time of death. Chris was born in Denver, CO on July 15, 1954, to Odis and Betty (Clayton) Grable of Northglenn. He was the second oldest of 4 sons. He graduated from Northglenn High School in 1972 and began his work life at Utility Trailers alongside his father-in-law. Chris married his high school sweetheart Kathleen (Masters) on February 14, 1976. In May of 1977, they welcomed their twin boys, Keith and Dean, who were his pride and joy. He completed his education to become an electrician. He worked as an electrician for the local union for several years. He retired from the City of Commerce City in 2016 where he was an electrical building inspector. Chris lived in Eaton, for the past 5 years. Chris LOVED to do anything that involved his boys or grandsons, whether it was watching them play ball, having fun at the lake, building things with them or for them, teaching them inappropriate things, or even barking orders at them. Chris was an electrician by trade but MacGyver by hobby. Ask him to build something and the answer was always “no” at first, but give him some time and he always made it work. He enjoyed watching NASCAR races on Sunday afternoons in his chair while napping. He equally enjoyed sitting outside his camper in his chair killing flies and chatting with anyone who would listen. He got a kick out of arguing with his equally as stubborn daughters-in-law in his pajama pants and Carhartt shirts. One of his favorite more recent pastimes was shopping on Amazon, but hands down his favorite thing to do was spend time with his family (and friends that are family) at the lake. Chris is preceded in death by his father Odis, mother Betty, and mother-in-law Charlotte Masters. Chris is survived by his wife of 45 years, Kathy “GG” of Eaton; father-in-law Herb Masters of Brighton; Sons Keith (Susan) of Mead and Dean (Jessica) of Eaton; his brothers Randy (Betsy) of Thornton, Garvin of Northglenn, and Joel; and grandsons Scott, Zac, Will, Jaxon, Ryan, and Austin. A celebration of life open house will be held on Sunday, September 26, 2021, at the Eaton Country Club, 37661 C.R. 39 from 11:00 am to 3:00 pm. In lieu of flowers, please consider making a donation to the American Heart Association in Chris’ name. Cheers

Chris Arthur &#8220;Cramps&#8221; Grable of Eaton, CO passed away on September 20, 2021, at UC Health Anschutz Medical Campus in Aurora, CO from heart failure. He was surrounded by his beloved wife and twin boys at his time of death. Chris... View Obituary & Service Information

The family of Chris Grable created this Life Tributes page to make it easy to share your memories.

Send flowers to the Grable family.