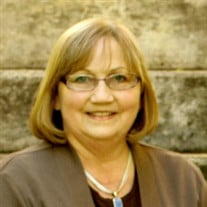 Cynthia Kay (Lewis) Clark, 64, of Greeley, departed this life on May 12, 2018, surrounded by family at North Colorado Medical Center. She was born on November 29th, 1953, in Binghamton, New York, to Gordon and Doris Lewis. She graduated from Arizona State University with a degree in Humanities, spent over a year in Guadalajara, Mexico, and then went on to receive two Master’s degrees from the University of Northern Colorado in Special Education and Bilingual Education. She married James Richard Clark on September 19, 1981 and had four sons. She taught English as a Second Language at Platte Valley Elementary School for 15 years, until her retirement in 2010. She attended church at Bethel Baptist and later at Summitview Community Church. Cindy’s love of teaching was evident in her classroom and her love of family was evident in her home. She enjoyed travelling with Jim and spending countless hours reading and making special memories with her grandkids. Family and friends can all attest to her steadfast faith in the Lord Jesus Christ, in whom she found her strength, joy, and saving grace. She is survived by her husband Jim, brother Scott Lewis and sister Nancy Carter, sister-in-law Marilyn, sons Halden (Ginny), Caleb (Marlys), Daniel (Ashlie), and David (Kaci) Clark as well as 10 cherished grandchildren: Connor, Logan, Mailey, Chase, Evelyn, Naomi, Talitha, Eliana, Jane, and Lochlan. Cindy was preceded in death by her mother and father and her brother-in-law Bill Clark. The funeral service will be held Wednesday, May 16th, at 4:00 pm at Summitview Community Church, 801 37th Street in Evans. As many know, two things Cindy loved were flowers and Christian education. Therefore, any memorial donations may be made to Dayspring Christian Academy and flowers can be sent to Moser Funeral Service. An online obituary and guestbook are at www.moserfuneralservice.com

Cynthia Kay (Lewis) Clark, 64, of Greeley, departed this life on May 12, 2018, surrounded by family at North Colorado Medical Center. She was born on November 29th, 1953, in Binghamton, New York, to Gordon and Doris Lewis. She graduated from... View Obituary & Service Information

The family of Cindy Clark created this Life Tributes page to make it easy to share your memories.