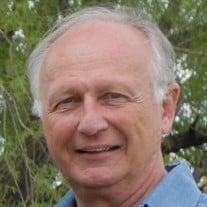 Daniel E Roberts, age 67, of Greeley, joined God’s Kingdom on January 26, 2018 peacefully in his home after a valiant battle against pancreas cancer. Dan was born in Englewood, CO on September 8, 1950 to Edith and Eugene Roberts. He graduated from Englewood High School and attended the University of Northern Colorado. He married Charlotte Stertz on August 6, 1972 and raised 3 daughters, Annette, Christine and Lori. He is also survived by 6 grandchildren, Alanna, Madison, Noah, Brady, Victoria and Mallory and was preceded in death by his mother and father and one grandson, Benjamin. Dan was a talented Master Electrician and Facilities Engineer, spending more than 20 years working for Hewlett Packard in Greeley, and later finished his career at Sungard Availability Services. He loved spending time camping with his family, rockin’ out to” feel good oldies” music, and putting many miles on the ski boat. He found great joy in providing memorable trips for his family, while also coaching his kids’ sports teams and spoiling his grandkids with frequent ice cream stops. His family memorialized him with the following statement… “Dan fiercely loved his wife and family, and devoted his time providing for and supporting them. He never knew how to take a day off, as he always found a project to complete or something to fix for one of his kids. His loyalty to his family meant he never rested, and his giant warrior heart meant he would do whatever it took to care for his family. He was a steadfast and faithful Christian, with an unwavering moral foundation, leaving behind a lasting legacy for his children and grandchildren.” His funeral service will be held Tuesday, January 30th, 2018 at Generations Church (formerly Greeley Wesleyan Church) at 11 a.m. Address is 3600 West 22nd Street, Greeley, CO 80634. In lieu of flowers, the family would appreciate donations be made to the Rowan Tree Foundation (www.rowantreefoundation.org), an organization providing substantial support to families grieving the loss of a child. An online obituary and guest book are at www.moserfuneralservice.com

Daniel E Roberts, age 67, of Greeley, joined God&#8217;s Kingdom on January 26, 2018 peacefully in his home after a valiant battle against pancreas cancer. Dan was born in Englewood, CO on September 8, 1950 to Edith and Eugene Roberts. He... View Obituary & Service Information

The family of Dan Roberts created this Life Tributes page to make it easy to share your memories.

Send flowers to the Roberts family.