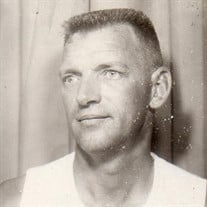 Daniel “Dan” W. Rapelje, 83, of Nunn, passed away on Wednesday, September 12, 2018 at the Bonell Good Samaritan Center in Greeley. He was born June 1, 1935 to Clarence L. & Hattie (Griffith) Rapelje in Lansing, Michigan. In 1954, he married Shirley Van Raalte and to this union 5 sons and a daughter were born. They later divorced. Then on March 19, 1967, he married Dixie Monroe in Loveland, Colorado and they recently celebrated 51 years of marriage. Dan worked as an over-the-road truck driver for most of his life. He was an active member of Living Hope Community Church. For many years, he was a member of AU-American Union Pigeon Association and played the guitar in the Bluegrass Gospel Jam Group in Northern Colorado. He had a tough exterior, but he was a loving husband. He is survived by his wife, Dixie Rapelje, sons, David, Mark, Eugene, Matthew, and Clarence Rapelje, sisters, Annabelle Dusick and Helen Ripley, and numerous grand and great grandchildren. Dan was preceded in death by his parents, Clarence & Hattie Rapelje, a daughter, Karen Short, his brothers, Victor & Roy Awrey, and his sisters, Dorothy Youngs and Blanche Oberlin. Services will be held at a later date. An online guestbook and obituary are available at www.moserfuneralservice.com.

The family of Daniel "Dan" W. Rapelje created this Life Tributes page to make it easy to share your memories.

Send flowers to the Rapelje family.