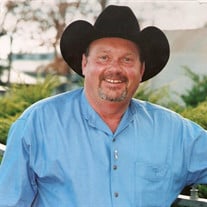 Danny Dean Lynn, 70, of Greeley, passed away on Saturday, January 4, 2020 at his home. He was born March 14, 1949 in Greeley to Earl W. & Eva U. (Cecil) Lynn. He was a 1967 graduate of Greeley Central High School. After high school, Danny enlisted in the United States Navy, and once discharged, went on to earn an Associate of Arts Degree from AIMS Community College. On September 29, 1968 he married Mary Anna Huffman in Evans, Colorado. They were married for 51 years. Danny worked in Logistics at Kodak from 1972-2004 and then worked for Greeley District 6 in Security. He was a proud member of the Greeley Stampede Wranglers for over 25 years. Being President of the Stampede Wranglers for one year, on the Committee for five years, and winning the Carl Hirsch award were among his greatest accomplishments. He is survived by his wife, Mary Lynn, a son, Dusty Daniel Lynn, a daughter, Wendy (Justin) Lynn Markwardt, and three grandchildren, Samantha, Derek, and Taylor Markwardt all of Greeley. Also, a brother, Robert (Clara) Lynn of Loveland, Colorado, and sisters-in-law, Roberta Lynn of Tucson, AZ, and Margie Lynn of Greeley. He was preceded in death by his parents, Earl & Eva Lynn, sisters, Ruby (Clarence) Kaiser and Mary (Wayne) Wadsworth, and brothers Raymond and Lawrence Lynn. Visitation will be held from 4:00-6:00 p.m. Tuesday, January 7, 2020 at the Moser Funeral Service Chapel, 3501 S. 11th Avenue in Evans. Funeral Services will be 11:00 a.m. on Wednesday, January 8, 2020 with visitation one hour prior to service at the Evangelical Free Church of Eaton, 1325 3rd Street in Eaton. In lieu of flowers, donations may be made to St. Jude’s Children’s Hospital in care of Moser Funeral Service.

The family of Danny Dean Lynn created this Life Tributes page to make it easy to share your memories.

Danny Dean Lynn, 70, of Greeley, passed away on Saturday, January...

Send flowers to the Lynn family.