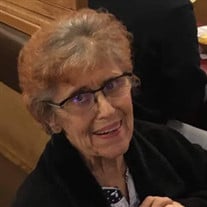 Darline Deloris Tapley, 84, of Greeley, passed away Sunday, April 4, 2021 at Fair Acres Manor in Greeley. Darline was born January 31, 1937 in Enid, Oklahoma to Lee Albert and Ruth Marie (Farrell) Plunckett. She resided in Lincoln, NE until 1973 before moving to Greeley, Colorado. She married Murray Tapley on May 3, 1981 in Greeley. They moved to the San Louis Valley and moved back to Greeley in 2004. Darline worked several years in food service for nursing homes. She moved to Fair Acres Manor in Greeley on December 31, 2020, where she resided until her death. She was a member of Harvest Time Tabernacle Church in Evans, CO. Darline is survived by her son, Jim Shepard of Beatrice, NE; daughter, Linda Edwards of Evans, CO; eleven grandchildren; twelve great-grandchildren; three great-great-grandchildren; brother, Lee Plunckett of Oklahoma City, OK; and sister, Leah Palmer of Enid, OK. She was preceded in death by her husband, Murray Tapley in 2014; daughter, Brenda Shepard; grandson, Ryan King; sisters, Dorothy Downey and Donna Liles; mother, Ruth Farrell; and father, Lee Plunckett, Sr. A Celebration of Darline’s Life and private family inurnment will be held at the Evans Cemetery at a later date.

The family of Darline Deloris Tapley created this Life Tributes page to make it easy to share your memories.

Send flowers to the Tapley family.