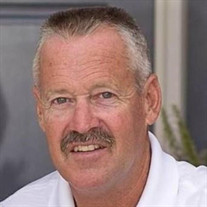 David Wayne Dyer was welcomed into the arms of Jesus on January 17, 2021 as he was surrounded by family at home after a 2.5 year courageous battle with esophageal cancer. Dave was born August 24, 1960 to Robert & Phyllis (Smith) Dyer. He graduated in 1980 from Eaton High School and married his high school sweetheart, Janice Dorn on March 17, 1984. Raised on the family’s farm east of Galeton, Colorado, Dave’s love for agriculture was lifelong and something he proudly shared with his wife and children. Known for his ability to tackle any project big or small, he made sure these projects were always a family bonding experience. Throughout the years Dave shared his passion for farm life with many who learned lifelong skills because of him. Helping others in need was his calling and God gave him a servant’s heart along with the knowledge, tools, and equipment to do so. Dave was known for his adventurous spirit as he was always willing to step out of his comfort zone and try new things, one of which included the several years he and his family spend ranching in Paraguay. He gladly rose to face every challenging situation that God put him in even though he could always be heard to say sarcastically “It’s always something!” Dave had a way of encouraging, supporting and helping people find their purpose without pushing or judging them. He passionately shared his love of Christ with others and was a true example of a man of God. Even throughout his fight with cancer, his faith never wavered and grew stronger every day. He trusted the Lord’s plan throughout his life. Dave had a very strong work ethic throughout his entire life. He always worked hard but he also knew how to play hard. Whether it was four-wheeler trips to Moab, scuba diving or summer nights spent at the lake, he loved making precious memories with his loved ones. Dave is survived by his wife, Janice, sons, Tyler and Landon, daughter, Carly (Tate) Mesbergen, his mother Phyllis Dyer, and sister, Elaine (Paul) Olson, sister Paula (Doug) Dutton and brother, Steve Dyer. He was preceded in death by his father, Robert Dyer and brother, Jerry Dyer. Celebration of Life will be held in the Dyer’s shed at their family farm located at 26405 CR 74, Eaton, CO at 10:00 a.m. on January 30, 2021. Memorial contributions may be made in David’s name to the following organizations, UC Health Northern Colorado Foundation, and Pathways Hospice, in care of Moser Funeral Service, 3501 S. 11th Avenue, Evans, CO 80620.

David Wayne Dyer was welcomed into the arms of Jesus on January 17, 2021 as he was surrounded by family at home after a 2.5 year courageous battle with esophageal cancer. Dave was born August 24, 1960 to Robert & Phyllis (Smith) Dyer. He graduated... View Obituary & Service Information

The family of David Wayne Dyer created this Life Tributes page to make it easy to share your memories.

David Wayne Dyer was welcomed into the arms of Jesus on January...

Send flowers to the Dyer family.