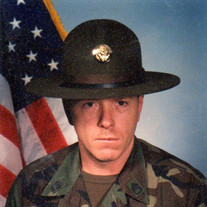 David Lester Thompson, 57 of Greeley, Colorado passed away on September 12, 2017 surrounded by his beloved family. He was born April 13, 1960 in Ypsilanti, Michigan. Mr. Thompson was a retired Sergeant First Class with 20 years of service from Sept. 9, 1979 through September 9, 1999. He was a manager at Chestnut Square Apartments in Windsor for 17 years from 2000 until 2017. David was talented, there was nothing he couldn’t do. He was a perfectionist and always expected that of his employees no more than himself. Many people trusted, respected and admired him. On November 21, 1981 David married the love of his life, his beautiful wife of 36 years, Arlene. He had two sons that he was extremely proud of; John and wife Shannen of Phoenix, Arizona and Shawn and wife Kaley of Greeley; 5 grandsons, Breadon, Nash, Aydin, Jordan and Gavin and 1 granddaughter, AmayaLynn. He is also survived by his mother, Judith of Kersey; sister, Debbie and husband Anthony of Windsor; brothers, Michael of Wyoming and Scott and wife Rachel of Greeley; his in laws, Margaret and Daniel Fuentes and numerous beloved nieces and nephews. A private family graveside service with full military honors will be held at Ft. Logan National Cemetery. A memorial service to celebrate David’s life will be held at 1:00 p.m. on Monday, September 25, 2017 at Christ Community Church, 1301 15th Street in Greeley. The family asks that if you have it, wear the colors red, white and blue to honor Dave and the dedication he had for his country. An online obituary and guest book are at www.moserfuneralservice.com

David Lester Thompson, 57 of Greeley, Colorado passed away on September 12, 2017 surrounded by his beloved family. He was born April 13, 1960 in Ypsilanti, Michigan. Mr. Thompson was a retired Sergeant First Class with 20 years of service... View Obituary & Service Information

The family of David Lester Thompson created this Life Tributes page to make it easy to share your memories.

David Lester Thompson, 57 of Greeley, Colorado passed away on...

Send flowers to the Thompson family.