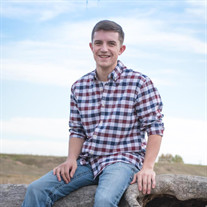 Dominic Ray Guerrieri, on Tuesday October 20th, 2020 passed away suddenly at the young age of 21. He was surrounded by his loved ones in his final hours. Dominic also became a hero by donating his organs in his final act. **In lieu of flowers, donations may be made to the Dominic Guerrieri Memorial Fund. Dominic was born in Greeley, Colorado March 8th, 1999, to Danny Guerrieri and Nicci Roy. Dominic lived in Kersey, Colorado. Dominic had a passion for hunting, fishing, camping, riding dirt bikes, wrestling, snowboarding, and doing anything fast! He had the biggest heart and loved big. Dominic also had a love and passion for all animals, especially his dogs Remi & Titus. During Dominic’s whole life he had been on hunting and camping trips with family and several close friends who he considered family. When he did hunt and fish nothing was ever in vain, he showed appreciation for the animal and all of it was used. His smile and laugh were infectious to all. He hugged with his whole heart. He was kind & witty. He loved joking around with his friends, whether it be ding-dong ditching houses or racing fast cars. No matter what it was, if it included an adrenaline rush, Dominic was there. Dominic made very strong friendships that most people would look at as a brotherhood rather than a friendship, with many people. Dominic had a very close and special relationship with his Sissy, Skylar; they were each other's best friends and other halves. His relationship with his other siblings Kayne, Jack and Lola were all very close, special, unique and full of love. He was an Amazing Big Brother. COUSIN love was unlike any other, so much love! With whatever rowdy activities they were doing, Dominic was most likely the ringleader in them all. The bonds he made with cousins and family were unbreakable. Dominic and his Dad were each other spitting images down to their smiles, laughs, jokes, hobbies even their outfits at times. Dominic and his mom shared many memories in nature, taking walks, running hills, or just chilling at home and talking about whatever they wanted. Nicci will move forward always honoring Nic’s words, “Ohana is forever and so are tattoos.” The love and bond he had with his Grandparents, Aunts and Uncles were extremely close and special. No matter who it was in the family, Dominic found a way to make each of their relationships unique in every way. Dominic is survived by, Father Danny Guerrieri & Step Mom Ali Waters-Guerrieri , Siblings, Skylar (19) Kayne (17) Jack (14) & Lola (8), Mother Nicci & Clint Roy, Grandparents- Linda Guerrieri, Paul & Nancy Stuart, Mary Randol, Randy James, Jeff & Mary Waters, Larry Heriford, Aunts & Uncles- Vicki (Ken) Alvarez, Cindy Guerrieri, Rod Guerrieri, Dan Johansen, Becky Horman, Katie Waters, Dawn (Kevin) Clifford , Brian Stuart, Jenn Leary Stuart, Cousins- Brittany, Brianna (Danny) Kaira, Kailynn, Marcus (Tyla), Cody (Stephanie), Bailey, Lauryn (Ian), Mitch, Nicole, Leo, Emma, Eron, Baile (Faith), Champ, Mia, Serena, Annika, 2nd Cousins- Brenden, Mason, Evan, Miles, Corbin, Quinn, Keeley, Aberlee, Beckham, Atlas, Nathan, Kace Preceded in death by, Grandpa Victor Guerrieri, Grandma Diane Heriford, Uncle Eron Stuart, Aunt Kristan Stuart, Great Great Aunt Kathy and Uncle Orv Eastman ***Due to Covid19 we will be asking that if you are feeling ill or exhibiting any Covid symptoms out of the courtesy of others please do not attend. Masks will be provided if you do not have one.*** Funeral Service will be November 1st and held at Kersey Community Church at 1pm the reception will follow at the Platte River Fort. In lieu of flowers, donations may be made to the Dominic Guerrieri Memorial Fund.

Dominic Ray Guerrieri, on Tuesday October 20th, 2020 passed away suddenly at the young age of 21. He was surrounded by his loved ones in his final hours. Dominic also became a hero by donating his organs in his final act. **In lieu of flowers,... View Obituary & Service Information

The family of Dominic Ray Guerrieri created this Life Tributes page to make it easy to share your memories.

Send flowers to the Guerrieri family.