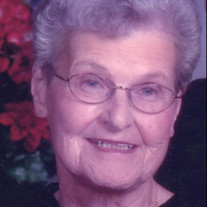 Dorothy Ann Hoyland went to meet Jesus on March 12, 2019. She was born in Dell Rapids, SD on November 24, 1929 to Alvina Struck and Ed Van Hecke. She had one brother, Donald who died over the Pacific Ocean while serving in the U.S. Air Force in 1947. Her mother also preceded her in death in 1937. She lived in many places, growing up in Eastern South Dakota and graduating from Point Loma High School in San Diego, CA. She met the love of her life Herb, who was a friend of her brother’s. They loved to dance to the big brass bands of the 40’s and were married in San Diego on June 21, 1947. They danced thousands of miles in their 62 years of marriage. Together they traveled where the Air Force sent them from California across the United States to New York, then Japan and back to New Jersey. Dorothy and Herb had five children; Gail, Don, Jeff, Dave and Ken. After leaving the armed service they moved back to South Dakota and raised their family in Rapid City, SD; she loved the Black Hills of South Dakota. Once their children had graduated, they moved to Greeley, Colorado. Dorothy loved cooking and spending time with her family and friends. Holidays and birthdays were a special time with big family get togethers and lots of food. She was very creative and crafty, making quilts, crocheted blankets, toys, and decorations whenever she had time. Music and her church were very important to her, she was a member of Immanuel Lutheran church in Greeley. She directed the choir at Our Redeemer in Rapid City and served as President of the Women’s Group there. She loved camping and playing cards or any game including 5 Crowns, Dominoes and Rummy. She and Herb played many Pinocle games with friends Don and LaVonne. She was loved and will be missed by many but mostly by her five children, Gail Knudson (Eldon), Don Hoyland (Ava), Jeff Hoyland (Carolee), David Hoyland (Melanie), and Ken Hoyland (Kathy); 14 grandchildren and 22 great-grandchildren. She was preceded in death by her husband, parents, brother and grandson Justin Hoyland. A Celebration of Dorothy's life will be held Saturday, June 1, 2019 at Immanuel Lutheran Church, 1865 14th Avenue in Greeley.

Dorothy Ann Hoyland went to meet Jesus on March 12, 2019. She was born in Dell Rapids, SD on November 24, 1929 to Alvina Struck and Ed Van Hecke. She had one brother, Donald who died over the Pacific Ocean while serving in the U.S. Air Force... View Obituary & Service Information

The family of Dorothy Ann Hoyland created this Life Tributes page to make it easy to share your memories.

Send flowers to the Hoyland family.