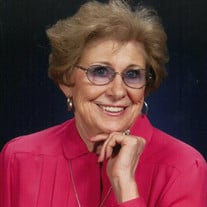 Dorothy E. Wood (Dottie) was born in Windsor, Colorado on July 2, 1929, to William Bechthold and Marie (Propp) Bechthold. She graduated in 1947 from Eaton High School. She married Arthur D. Gustafson in September, 1948. Two children were born of this marriage, Judy Rae (Gustafson) Joss and James A. (Jim) Gustafson. Dottie married Eugene Wood in 1968. Dottie worked as an office manager and bookkeeper for Widney, Droegemueller and Wills and later for Burdett Edgren prior to retiring. Dottie had a strong Christian faith and was a lifelong member of the First United Methodist Church. She was a former member of the Greeley Country Club where she played golf and she joined and played in a bowling league. She always enjoyed telling people she was the oldest member of the bowling league, even though she rarely disclosed her real age to her friends. Dottie was adventurous and traveled all over the world making new friends everywhere she went. She enjoyed creating crewel embroidery pictures and oil paintings. She was an avid cribbage player and especially enjoyed beating her brother, sisters, son, and grandchildren and she passed along her love of the game to her grandchildren. Dottie will be remembered for her good sense of humor and fun-loving disposition. She was very close to her grandchildren and she will be greatly missed by them and all of her family and friends. Dottie was predeceased by her husband, Eugene Wood; her daughter, Judy Joss; and her parents. She is survived by her son, Jim Gustafson (Carol); her grandchildren, Brianna Lepore (Jeremy), Matthew Gustafson (Jess) and their soon to be born son, and Heather Joss; her great-grandchildren, Christian Laur, Tyler Lepore and Levi Lepore; her brother, Paul Bechthold; her sisters, Wynona Sullivan and Edna Burgess (Robert); and many nieces and nephews. During the last year, Dottie fought a brave battle against cancer, which she could not have endured without the assistance of Pathways Hospice and her caregiver, Yvonne Pizarro. A graveside service for family and friends will be held for Dottie on September 24, 2021, at 2:00 p.m. at Sunset Memorial Gardens.

The family of Dorothy E. "Dottie" Wood created this Life Tributes page to make it easy to share your memories.

Send flowers to the Wood family.