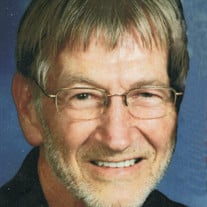 K. Douglas Fitch, 78, of Greeley, Colorado, formerly of Galesburg, Illinois died on December 22, 2018 after a brief illness. He was born to Warren and Luella Sauer Fitch in Ashland, Oregon on November 21, 1940. He married Georgia Ann Smith on April 1, 1961 in Greeley, Colorado. He graduated from Montrose High School in 1959. He earned his Bachelor’s degree from Colorado State College in 1963. He earned a Master’s degree from Colorado State College in 1969. He taught for several years in Cheyenne, Wyoming and Tulelake, California before moving to Galesburg, Illinois. He was a guidance counselor at Galesburg Senior High School for 26 years, retiring in 1995. Doug was an avid golfer and loved building and carpentry. He and two friends built a house in Galesburg, Illinois. He had a great sense of humor and was known for making bad puns. He was of the Christian faith and was very active in the First United Methodist Churches in Galesburg and Greeley. He was in the choir and served on the Board of Trustees in Galesburg. He is survived by his wife of 57 years Georgia Fitch, daughters Amy Fitch, Emily (James) Hunter, and Elizabeth (Greg) Canuteson, brother Mark Fitch, and grandchildren Moira Roethle, Zoe Fitch, Ellen and Michael Hunter, and Brennan and Natalie Canuteson. He was preceded in death by his parents, daughter Wendy Denton, and sisters Alaine Kendig and Wanda Fitch. A memorial service will be held at the First United Methodist Church 917 10th Ave., Greeley, Colorado on February 2, 2018 at 3:00 pm. Memorials can be made to either the American Stroke Association or Lymphoma Research Association c/o Moser Funeral Service, 3501 S. 11th Ave, Evans, Colorado, 80620. Cremation has been accorded. An online obituary and guest book are at www.moserfuneralservice.com

K. Douglas Fitch, 78, of Greeley, Colorado, formerly of Galesburg, Illinois died on December 22, 2018 after a brief illness. He was born to Warren and Luella Sauer Fitch in Ashland, Oregon on November 21, 1940. He married Georgia Ann Smith... View Obituary & Service Information

The family of Douglas Fitch created this Life Tributes page to make it easy to share your memories.

Send flowers to the Fitch family.