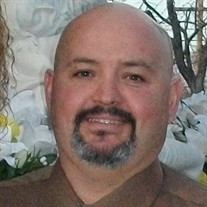 Dwight Kenneth Ramirez, 53, passed away March 9th in his home. He was born to Herman and Rocio Ramirez in Anchorage, Alaska. There, he grew up enjoying biking, fishing, camping, and his 1969 El Camino. His adventurous spirit is best exemplified by the season he spent commercial crab-fishing off the coast of Kodiak. He started dating his wife, Tammy, at UNC in Greeley in 1985, and she followed him to Alaska shortly after. They married in 1992 after a breathtaking proposal atop the Space Needle. The coupled eventually settled in Greeley where they raised four children. Dwight spent endless hours reading to their kids, teaching them board games, and sharing his passion for cooking. He became the neighborhood “bike fixer” and water balloon master. Later, fueling their love of rock, he took them to concerts and blared the likes of Metallica and AC/DC while cooking. Yet he welcomed the newest music groups and delighted in listening to the clan boast about their latest music discovery. Dwi indulged in all the nerdy - including binge-watching the latest Netflix series with his family piled on and around him. Summers were spent around barbecue grills and bonfires; winters were spent… around grills and bonfires, because the cold can’t get in the way of good food and family time. He was so proud of his loving, energetic, bright, and sassy children. Hanging out with them was his favorite thing. In their 34 years together, Dwight and Tammy watched each other grow and witnessed some of nature’s precious gifts─Northern Lights of AK, whales shooting out of the ocean, burning sunsets in Hawaii, and volcanoes erupting along “the ring of fire”. Intrigued by new, sometimes exotic foods, Dwi searched for palate pleasers to prepare together -a favorite being sushi of all varieties. They were most content to end up on the couch together at the end of a long day while he rubbed her feet. It is a blessing they could share their last dance together in January at their daughter’s wedding among old friends and family. His hard-work ethic, ornery demeanor, big hugs, and fabulous meals will be missed. He is survived by his wife, Tammy; their children, McKenzie Weiss and husband Eric, Joseph, Izabel, and Brock; his parents, Herman and Rocio Ramirez; and his siblings, Emmett, Glynis, and Gwen. A rosary will be held at St. Mary’s Church at noon on March 21, 2019 followed by The Liturgy of the Word. A reception at Journey Christian Church celebrating Dwight’s life will conclude the day.

Dwight Kenneth Ramirez, 53, passed away March 9th in his home. He was born to Herman and Rocio Ramirez in Anchorage, Alaska. There, he grew up enjoying biking, fishing, camping, and his 1969 El Camino. His adventurous spirit is best exemplified... View Obituary & Service Information

The family of Dwight Ramirez created this Life Tributes page to make it easy to share your memories.

Dwight Kenneth Ramirez, 53, passed away March 9th in his home....

Send flowers to the Ramirez family.