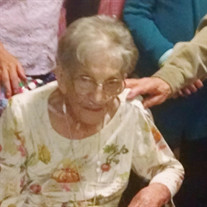 Edna Mae Daigger, 102 of Greeley, passed away on Monday, October 1, 2018 at Brookdale Senior Living. Edna Mae Daigger was born on July 4, 1916 at the home of Adam and Sadie Lichtenberg in Hastings, NE. The family moved to Perkins county where she grew up on a farm near Venango. She attended Hastings College after High School. She wanted to be a nurse, however she was too young to get into the nursing school, so she obtained a teaching certificate. At the age of 17, her first teaching job was at a country school with seven students in four grades. She taught school until she married George Daigger on May 19, 1937. They farmed in the Grant, NE area. At that time, teachers could not be married, so she took a break from teaching to raise a family. They moved to Oregon with their family for a short time, returned to Nebraska and settling down on a farm south of Madrid. When all of the children were in school, Edna Mae continued her studies and started teaching again in 1952. Throughout her teaching career she taught kindergarten, third, and fourth grades. She loved teaching and before retiring taught the children of some of her first students. George and Edna Mae remained on the farm 51 years. They moved into Madrid in 1997. While on the farm Edna Mae had a big garden, preserving food for the family, sharing the rest with neighbors and friends. In 2003 they moved to Bonell Good Samarian Community, Greeley, CO to be near their daughter. No matter where Edna Mae lived, she had a flower garden. When that was no longer possible she had potted flowers in or around her apartment. There were always violets in one of her windows. George passed away on April 3, 2007. Edna Mae continued to live at Bonell moving to Brookdale Senior living in 2014 when she was no longer able to live on her own due to the amputation of her leg. At the age of 98 she learned to walk with a prosthesis. This is how she lived, when life gave her a challenge, she didn't give up. Her attitude was that you can accomplish anything if you try hard enough. Music and church were important in her life, she sang and played the piano in school and church. While living at Bonell she was involved in the choir and played the piano and sang for residents. She was awarded the Bonell Good Samaritan award in 2011 for her volunteer work. Even though her eyesight was failing she continued to play her piano from memory. Quilting became her passion after retirement and she made many beautiful quilts for family and friends. While at Bonell, she made lap quilts for some of the residents. At Brookdale she crocheted pot holders and "scratchers" for family, friends and staff. She always had a concern for others and how she might help them. Survivors are; sons Gary and wife Sue of Whitney, NE., David of Aurora, daughter, Sandra Wingfield and husband Barry of Ault, grandchildren Julia Weibel, Jeanie Daigger and husband Rod Dunbar, Pam Abke and husband Jim, David Wingfield, and nine great-grandchildren. The family request that to honor her life of giving and caring for others, you send flowers to someone you love, donate to a charity of your choice, or take your mother/grandmother out to lunch. Celebration of Life services will be held at 9:30 a.m. on Saturday, October 13, 2018 at the Moser Funeral Service Chapel, 3501 S. 11th Avenue in Evans. Interment Eaton Cemetery. An online obituary and guestbook are at www.moserfuneralservice.com

Edna Mae Daigger, 102 of Greeley, passed away on Monday, October 1, 2018 at Brookdale Senior Living. Edna Mae Daigger was born on July 4, 1916 at the home of Adam and Sadie Lichtenberg in Hastings, NE. The family moved to Perkins county where... View Obituary & Service Information

The family of Edna Mae Daigger created this Life Tributes page to make it easy to share your memories.

Edna Mae Daigger, 102 of Greeley, passed away on Monday, October...

Send flowers to the Daigger family.