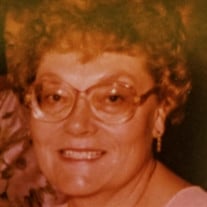 Elva LaVesta (Sigwig) Warren, 87, of Loveland, CO, passed away Wednesday, August 1, 2018 at McKee Medical Center in Loveland. Elva was born on July 4, 1931, in Vernon, Colorado to Ralph and Zilpha (Peeveler) Sigwig. She studied Art at the University of Wyoming with a publication of her work. Elva was united in marriage to Ernest Warren in 1949 in Denver, Colorado. They resided in Laramie, Wyoming where they raised their family. She later worked for Ivinson Memorial Hospital as a switchboard operator and worked in the medical records department. She lived at Seven Lakes Memory Care in Loveland since December 2017. She enjoyed crocheting, had a true love for books and was a “farm” girl. She is survived by her sons, Michael Warren of Hudson, CO, Russell Warren of Hudson, CO, Dallas (Karla) Warren of Cheyenne, WY; daughter, Barbara (Dwaine) Curtis of Windsor, CO; 10 grandchildren, five great-grandchildren; and a sister, Evelyn Clapper of Oberlin, KS. She was preceded in death by her husband; son, Steven Warren; and grandson, Jeffrey Curtis. Services will be held at a later date. An online obituary and condolences may be left at www.moserfuneralservice.com.

The family of Elva LaVesta (Sigwig) Warren created this Life Tributes page to make it easy to share your memories.

Send flowers to the Warren family.