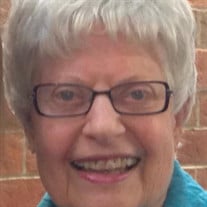 Eva “Louise” Herman, 87, passed away to be with our Lord Jesus Christ on October 24, 2021, due to COVID complications. Louise was born in Lyons, KS on September 25, 1934, to Harry and Verna Blackwill (their third of four children). They moved to Phillipsburg, KS when she was a young girl, then to Wray, CO where she attended and graduated high school in 1952. She then moved to Denver, CO, attended St. Luke’s Hospital School of Nursing, and received her Diploma Nursing Degree in 1955. She married James Reighter in 1956. In 1966, she moved as a single parent with her two daughters to Greeley, CO. She married Orville Herman in April 1970. She worked as an RN at Women’s Clinic of Greeley for 30 years and retired in 1996. Louise received the President’s Lifetime Achievement Award in March 2018 for over 4,000 hours of volunteer service. She was a member of the Keen Age Singers Choir for 17 years. She loved music and played the piano and organ. She was a devoted Christian and attended services at the First United Methodist Church and Sunny View Nazarene Church, now named Celebration Pointe Church. Louise leaves behind her sister Verleen Jones of Raleigh, NC, daughters Jeanette Troudt of La Salle, CO and Cynthia Reighter of Lone Tree, CO, step daughter Vickie (Robert) Crombie of Sequim, WA, granddaughter Camilla Sampson of Woodland Park, CO, grandson Eric (Jacque) Troudt of Greeley, CO, step granddaughters Kimberly Crombie Phelan, Robyn Crombie, and Darcy (Andrew) Crombie Markovich, and step grandson, Tod Wightman, three great grandchildren (Sarah and Benjamin Sampson and Easton Troudt), seven step great grandchildren and six step-great great grandchildren. She also leaves behind other loved ones such as Rollin “Buck” McAllister (Jeanette’s significant other), many wonderful nieces, nephews, and lifetime friends. Louise is preceded in death by her spouse Orville Herman, sister Emma May DeBey, brother Delwin Blackwill, and step daughter Jeanne Wightman. A Memorial Service will be 2:00 p.m., Friday December 3, 2021 at the Moser Funeral Service Chapel. At the family's request, masks will be required. For those that are not able to attend the service, live stream will be available. Any memorial gifts can be sent in care of Moser to either Celebration Pointe Church or the American Cancer Society.

The family of Eva "Louise" Herman created this Life Tributes page to make it easy to share your memories.

Send flowers to the Herman family.