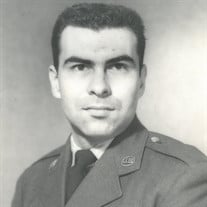 Florentino (Frank, Sonny) Emmett Blair, 81, went home to the Lord on Thursday, November 5, 2020, in Windsor, Colorado. He was born on November 16, 1938 in Red Mountain, California, to Florentino (Tino) Blair and Vivian Ruiz. Frank graduated from Garces High School in Bakersfield California, in 1957. He was in the Navy Reserve during High School and joined the Marines after graduation. He transferred later to the Air Force, where he served one tour in the Vietnam War. Frank retired from the military after 23 years of service, and then pursued a Bachelors degree in Business. He worked at a Community College and taught at various places in California. In his later years he worked for CASA. Frank was an altar boy when he was young, went to seminary for a time and was involved with the Knights of Columbus as an adult. He enjoyed hunting, fishing, dancing, flee markets, and trying new restaurants. He especially enjoyed seeing his grandchildren. On August 11, 1961, Frank married Leila (Pat) Patricia Smith. They were married for 16 years and had 5 children together, 11 grandchildren, and 7 great grandchildren. On May 18, 1982, Frank married Virginia (Ginny) Louise Williams. They were married for 31 years. Survivors include his children Cynthia Hooper from Wyoming, Deborah Brier and John Blair both from Colorado, Melissa Harmening from South Carolina, sisters Clara Mongrain and Dorothy Profita both from Virginia, brother Mike Blair from California, step children Marisa Williams from Colorado, Kevin Williams from Maryland, David Williams from California, all of his grandchildren, nieces, nephews and cousins. He was preceded in death by his parents Florentino (Tino) and Vivian Blair, grandson Matthew Mayborn, daughter Pamela Christine Richardson, and wife Virginia (Ginny) Blair. Private service will be held.

The family of Florentino Blair created this Life Tributes page to make it easy to share your memories.

Send flowers to the Blair family.