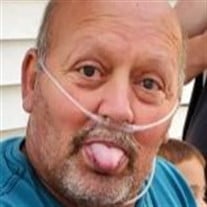 Floyd “Keith” Davis was born on August 13, 1961, to Lloyd King Buckley and Anita Louise Goodrich in Red Bluff, Ca. Keith was the 15th child of his family of 21. Keith was raised in Northern California and attended various school in that area, Keith attended Red Bluff High School until the death of his father, when he quit to help care for his younger siblings. The family then relocated to North Central Oklahoma in 1978. Keith met Kristie in Enid, OK and together they raised their 6 kids. In 1998, Keith decided to relocate his family to Colorado in give them the best life possible. Keith worked in various industries, including Roofing, Automotive Repair, Pipe Fitting, and Farmers Market for Miller Farms. Keith enjoyed fishing, hunting, cooking, taking an old clunker and turning it into something to be proud of, most of all he enjoyed the time with his family, especially his Grandkids!!!! Keith is survived by his wife: Kristie, children: Floyd Jr., Abidell and Mike, Jessica and Freddie, Junior and Patti, Andrew and Michelle, Joseph, and Jenifer and Trent. 16 Grandchildren: Lindsay, Lucus, Brandin, Payton, Baby J, Drew, Kiahya, Bradyn, Adesyn, Emma, Brendyn, Rudy, Matthew, Kerrie, Kristen and Freddie-Freddie. Seven Sisters, Seven Brothers, Twelve Sister-in laws, Ten Brother-in-laws, and a numberous of Nieces and Nephews, and loads of family and friends. Keith is proceeded in death by his mother, Father, Five Brothers, One Sister, One Brother-in-Law, One Sister-in-Law, Eleven Nephews, and Three Nieces. In lieu of flowers, the family asks that you make a donation to Platteville Youth Recreation in Platteville CO, the Enid YMCA in Enid, OK, or your local Youth Recreational Association.

Floyd &#8220;Keith&#8221; Davis was born on August 13, 1961, to Lloyd King Buckley and Anita Louise Goodrich in Red Bluff, Ca. Keith was the 15th child of his family of 21. Keith was raised in Northern California and attended various school... View Obituary & Service Information

The family of Floyd "Keith" Davis created this Life Tributes page to make it easy to share your memories.

Send flowers to the Davis family.