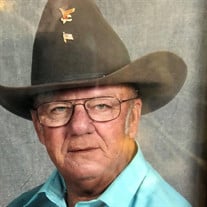 Franklin L. “Frank” Yockey, 78, of Evans, passed away on Sunday, February 7, 2021 at North Colorado Medical Center in Greeley. He was born May 4, 1942 in Hartington, Nebraska to Jerry LeRoy & Sena M. (Hill) Yockey. On August 1, 1961, he married Virginia Marie Thurlow in Cedar Bluffs, Nebraska. They lived in Greeley since 1984 before moving to Evans in 2017. Frank was an Over-the-Road Truck Driver for many companies including, Messenger, Mitchek, Northwest Transport, Bulk Transport and retired from Walmart. He enjoyed fishing, camping and being with his family, and had coffee every morning with his regular friends. He is survived by his wife, Virginia Yockey of Evans, Colorado, a son Robert Gene Yockey of Carrollton, Texas, a daughter, Tamera Lynn (Terry) Perdue of Greeley, Colorado, a sister, Shirley Enyart of Dacono, Colorado, 5 grandchildren; Ryan Perdue, Brady (Michelle) Perdue, Kylei Perdue, Michael (Kelcie) Yockey of Haxtun, Colorado and Taylor Yockey of Longmont, Colorado, 4 great grandchildren and many nieces and nephews. He was preceded in death by his son, James Dean Yockey and a granddaughter-in-law, Kati Perdue. A celebration of Frank’s life will be held 2:00 p.m. on Saturday, February 13, 2021 at the Moser Funeral Service Chapel, 3501 S. 11th Avenue, Evans, Colorado.

The family of Franklin "Frank" L. Yockey created this Life Tributes page to make it easy to share your memories.

Send flowers to the Yockey family.