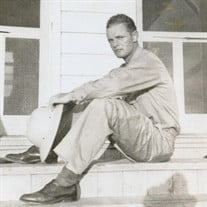 Gail Arthur Bagley, 98, went to eternal rest on November 14, 2018, with his family faithfully at hand. Gail was born March 13, 1920, near Vernon, Colorado, to Alice Catherine (Beach) Bagley and her husband Arthur. He was the second of five children and was schooled in Vernon and Eckley. Like his siblings, he worked daily on the ranch and lived with horses and Model Ts and without electricity, as the family weathered often lean times. His parents having themselves been educated, Gail was encouraged to go on to college and worked his way to a B.S. Degree at Colorado A. & M. in 1942. He then served in the U.S. Army Air Corps in World War II in North Africa and Italy. In 1945, he married Betty Sutter, a union that produced four children and lasted until her death in 2016. Gail’s occupational history included teaching school, farming, work in the Department of Agriculture’s Soil Conservation Service, a term in East Africa as an agricultural sustainability advisor, and surveying for a large engineering firm. When he and Betty retired, for years they traveled domestically and internationally, and in their motorhome visited every State and nearly every Canadian Province. A hallmark of Gail’s life was his involvement with family, both immediate and extended. He provided constant help and guidance to his children as they grew, and was always ready and willing to lend a hand when a relative (or friend) was in need of something he could do. During years when Betty worked and after, he cooked breakfast every day. He was strong and sturdy and knowledgeable in many realms, was a talented carpenter and woodcarver, and wrote thoughtfully beautiful letters. Although untrained, he possessed natural musical talent and occasionally revealed a fine singing voice. Gail was humble and unassuming; he chose his words carefully and people listened when he spoke. He was welcoming to everyone, saw good in all people, and was a steady moral presence. He drove cattle in a driving blizzard and endured the midst of a wildebeest migration on the Serengeti Plain, lived solidly and stoically and complained of nothing. The worst happening for Gail and Betty was the loss of their youngest, Catherine, to a brain tumor when she was a young adult, but they accepted that with quiet serenity and went on, leading exemplary and loving lives. Gail is survived by three sons: David of Utica, New York, Steven (Erica) of Eaton, Colorado, and Thomas (Alana) of Mission Viejo, California, as well as a sister Betty Jo Hawkins of Ottumwa, Iowa and numerous grandchildren, great-grandchildren, nieces and nephews. He was preceded in death by his daughter Catherine Anne Bagley Parker of Laguna Beach, California, and his brothers Thaine and Darrell and his sister Maxine Godsey. With Gail’s passing comes the loss of a family patriarch and the realization that he was of the kind now rarely seen, sorely missed, and to be remembered for what they left behind and inspired in us all. A private family service will be held at a later date.

Gail Arthur Bagley, 98, went to eternal rest on November 14, 2018, with his family faithfully at hand. Gail was born March 13, 1920, near Vernon, Colorado, to Alice Catherine (Beach) Bagley and her husband Arthur. He was the second of... View Obituary & Service Information

The family of Gail Arthur Bagley created this Life Tributes page to make it easy to share your memories.

Send flowers to the Bagley family.