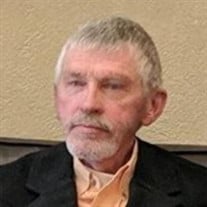 Galen Kieth Hill was born August 17, 1953 in Brush, CO, son of Kieth R Hill and Elsie E Hill. He passed away on July 24, 2020 with his wife of 42 years, Kathy, by his side. Galen was a hard-working country boy who grew up farming and ranching with his family in Eastern Colorado. He graduated from Liberty High School in Joes, CO, in 1971, and moved to Greeley, CO. He worked a variety of jobs from pen checker, to heavy equipment operator, while farming his own place on the side with his wife. After a time, his entrepreneurial spirit kicked in and he bought a produce stand in Texas, sold that, and returned to Colorado to become owner of a paper recycling business which he grew to great success in 33 years. He sold that business in 2014 and redirected his time to full time farming. In all of these adventures, he strived to learn something new, try new things, and gained many friends in the process. It enriched his life. Galen's love in life was faith, family, friends, and fast horses which were all intertwined. His faith led him to a desire to minister and help family and friends over the years. He had a strong passion for running Quarter Horses. He was a lifetime member of American Quarter Horse Assn. and served years on the Board of Directors in the Rocky Mountain Quarter Horse Assn. With his wife, he bred and raised many good running Quarter Horses. His fast horses winning at the track were truly a highlight of his life and the friends made were without equal. He raced in many states with very good success. In recent years, he joined a partnership to race horses in New Mexico. Not only did he enjoy success in that endeavor and fulfilled dreams, but all the people he met, and many friendships made over the years while racing horses added joy to his life. Galen is survived by his wife, Kathy Stoker, of La Salle, his father, Kieth Hill of Eaton, sisters Maxine (Roger) Massey, Christine (Mark) Burke, of Eaton, CO and numerous nieces and nephews. He was preceded in death by his mother, Elsie Hill. Galen chose to be cremated. A memorial service is being planned for the near future. In lieu of flowers, donations may be sent to Northern Colorado Cowboy Church (N3C), Box 15, Lucerne, CO 80646 or to the Race Track Chaplaincy, PO Box 449, Ruidoso Downs, NM 88346

Galen Kieth Hill was born August 17, 1953 in Brush, CO, son of Kieth R Hill and Elsie E Hill. He passed away on July 24, 2020 with his wife of 42 years, Kathy, by his side. Galen was a hard-working country boy who grew up farming and ranching... View Obituary & Service Information

The family of Galen Kieth Hill created this Life Tributes page to make it easy to share your memories.