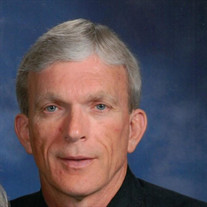 Gary Scott Sisler, 67, of Eaton, passed away on Sunday, November 8, 2020 at North Colorado Medical Center in Greeley. He was born January 29, 1953 to Wayne & Lola (Spellman) Sisler in Salina, Kansas. He graduated from high school in Concordia Kansas and went on to attend the University of Kansas getting his Bachelor of Science Degrees in Chemistry and Biology. He was employed by International Harvester as a Parts Manager, a Salesman for Robinson Chevrolet, and a Product Support Manager for Case-IH. He retired from Case-IH in 2008 and devoted his time to his computer business. On December 30, 1972, he married Paula J. Stucky at the First Mennonite Church in Pretty Prairie, Kansas. They moved to Eaton, CO in 1993. Gary was a member of the Evangelical Free Church of Eaton and served as an usher and for the worship team as part of the sound and tech crew. He was involved in Gideons International as well and served as the Secretary and Web Master. He enjoyed hunting and fishing and working with computers. He is survived by his wife, Paula Sisler of Eaton, Colorado, his children, Gary Sisler II of San Diego, California, Carrie Sisler of Eaton, and Melanie (Bryce) Maifeld of Greeley, his mother-in-law, Phyllis Stucky of Pretty Prairie, Kansas, a granddaughter, Lola Grace Sisler of San Diego, California, his brothers, Steve (Lori) Sisler of Pearce, Arizona, Bruce (Judy) Sisler of Columbia, Missouri, his sisters, Judy (Kevin) Martin of Maryville, Missouri, and Jana Sisler of St. Louis, Missouri, his sisters-in-law, Juanita (Tom) Zerfas of Hays, Kansas, Vickie (Ron) Jacques of Hutchinson, Kansas, Kellee (Randy) Goering of Pretty Prairie, Kansas, Joni (Roger) Vogt of Wichita, Kansas, brother-in-law Bruce (Diana) Ellingson, of Hanley Falls, Minnesota, aunts and uncles and numerous nieces and nephews. He was preceded in death by his parents, Wayne & Lola Mae Sisler, his father-in-law, Gerald G. Stucky and a sister-in-law, Geri Ellingson. Visitation will be 4:00-7:00 p.m. Friday, November 13, 2020 at the Evangelical Free Church of Eaton, 1325 3rd Street in Eaton and again on Saturday, November 14th from 9:00 a.m. with a funeral service beginning at 10:00 a.m. also at the Evangelical Free Church. Interment Eaton Cemetery. Memorials may be made to The Gideons International and the Evangelical Free Church of Eaton.

Gary Scott Sisler, 67, of Eaton, passed away on Sunday, November 8, 2020 at North Colorado Medical Center in Greeley. He was born January 29, 1953 to Wayne & Lola (Spellman) Sisler in Salina, Kansas. He graduated from high school in Concordia... View Obituary & Service Information

The family of Gary Scott Sisler created this Life Tributes page to make it easy to share your memories.

Gary Scott Sisler, 67, of Eaton, passed away on Sunday, November...

Send flowers to the Sisler family.