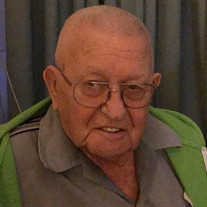 George Delphin Adams of Greeley, Colorado was called home to his Lord and Savior on Sunday, March 1, 2020. He died at Bonell Good Samaritan in Greeley, Colorado. George was born in York County, Nebraska on August 12, 1936 to Francis “Frank” and Gladys (Ivy) Adams of Waco. He was the second oldest of the family’s four children. He enjoyed fishing during his childhood and was even known to miss a few school days if the fish were biting. He received his high school education from Exeter Public Schools in Exeter, Nebraska. He enlisted in the middle of his junior year in school in the Airforce. Later in life, he proudly served as a member of the Nebraska National Guard. George held employment in various businesses in York County, Nebraska as well as in the Fort Collins and Greeley, Colorado area. He always had a love of jobs where he served as a cook. He worked for Champion Mobile Homes, the cook for the York County Sherriff’s Department, Grant’s Truck Stop, and worked as a cement truck driver. He married his first wife, Mary Brenneman on October 4, 1958, while he was serving in the military. They divorced in 1996. He then married Georgia Weber until her death in 1999. George later remarried Mary Brenneman on November 6, 2008. He said this was one of the happiest times of his life. George had many hobbies that included woodworking, bowling, and watching Husker Football. He was a Lutheran and found comfort in his faith in his final days as he fought stomach cancer and various other health problems. George is survived by his sister Velma and her husband Paul Cain Sr. of Burwell, NE; his adopted son, Mitch Adams; seven nephews and nieces: including Rev. Paul Cain Jr., and Candace Cain, Katherine Clinkenbeard, Cynthia Petrovich. Douglas Clinkenbeard, Melinda Garland, and Timothy Clinkenbeard; his cousins Katherine Holiday, Freddy Jo Brandon, Doris Jo-Ann Bruntz, Paul Taylor, Shirley Jones, John Hogg and Elton Hogg; and his life-long friend Butch Pruette and his wife JoAnne. George was preceded in death by his parents, two sisters that include Francis Adams and Mary Margaret Adams, and his two wives Mary and Georgia. Burial will be at Lakeview Cemetery in Windsor, Weld County, Colorado. A marker will also be in the family plot in the Exeter, Nebraska Cemetery.

George Delphin Adams of Greeley, Colorado was called home to his Lord and Savior on Sunday, March 1, 2020. He died at Bonell Good Samaritan in Greeley, Colorado. George was born in York County, Nebraska on August 12, 1936 to Francis &#8220;Frank&#8221;... View Obituary & Service Information

The family of George Delphin Adams created this Life Tributes page to make it easy to share your memories.

George Delphin Adams of Greeley, Colorado was called home to...

Send flowers to the Adams family.