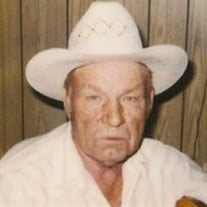 George Lowell Warner, 83, of Greeley passed away on Wednesday, March 20, 2019 at his home. He was born November 15, 1935 to Ernest & Letha (Owens) Warner in Lamar, Colorado. On November 14, 1959, he married Deloras Scheck in Greeley. George worked as a contractor in the construction industry. He owned his own business for many years, but in his later years he worked for Bliss Produce from which he retired in 1997. He was a life member of the Adamson Warmuth VFW Post #6624. He and his wife Deloras enjoyed farm and yard sales and going to auctions. He is survived by his wife, Deloras Warner of Greeley, his sons, Mike (Callie) Warner and Pat (Teresa) Warner, a daughter, Janice Taylor, his brother, Sam (Lou Ann) Warner, and a sister, Ruebella Colbert, 11 grandchildren and 16 great grandchildren. He was preceded by 6 brothers & sisters, a granddaughter, Victoria Baros and a great grandson, JJ Hora. A celebration of George’s life will be held at 10:30 a.m. Monday, March 25, 2019 at the Moser Funeral Service Chapel, 3501 S. 11th Avenue, Evans. The celebration will continue with a reception following at the Adamson - Warmuth V.F.W. Post #6624, 3501 State St. in Evans. Memorial gifts may be made to the VFW in George’s name in care of Moser Funeral Service, 3501 S. 11th Avenue, Evans, Colorado 80620.

The family of George Lowell Warner created this Life Tributes page to make it easy to share your memories.

George Lowell Warner, 83, of Greeley passed away on Wednesday,...

Send flowers to the Warner family.