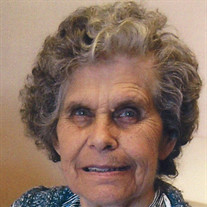 Gloria Haney, 79, of Greeley Colorado passed away at Centennial Healthcare, January 20, 2018. She was born April 17, 1938 in Greeley, Colorado to Jake Hetterle and Ada Florence (Miner) Hetterle. She grew up in the Gilcrest area. She attended school in Gilcrest and attended Campion Academy. She received her GED later. She was married to Roy Haney March 15, 1955. They had four children. They lived mostly in Greeley until they moved to several country homes near and around Eaton where their children attended school. In 1977 she and her husband and son moved to property close to Carpenter Wyoming. They found good neighbors and a hard and happy life there. Gloria enjoyed her Sabbath and studies at the Seventh-Day-Adventist Church in Cheyenne, Wyoming where she was a member. Later she was attending church on Sunday also in Carpenter where she found more inspiring friends. Her greatest passion was when she worked for Carpenter Elementary School in Carpenter, Wyoming. It was there, that she spent her happiest days, being a teacher's aide and interacting with 22 years of passionate children. She grew very fond of many students and many continued contact with her as they grew up. As she was slowly fading to the awful disease of Alzheimer's, she lost her husband in 2004. Later as the disease progressed, she was forced to leave her beloved home. She moved to Cheyenne temporarily and then was moved closer to her family to Meadow View in Greeley, CO. As her health began to fail more, she was moved to Centennial Healthcare where she could get nursing care. All her life she was very strong and a hard and diligent worker. Although she found it hard to show her love, she was dedicated to her husband and her family. She is survived by her children, Janna and Rusty DePorter of Carr, CO, Glenda Blais of Ault, CO, Brenda and Duane Rau of Ault, CO and Monty Haney of Greenwood, Arkansas. Nine grandchildren and twelve great-grand children. She was preceded in death by her grandson, Chad DePorter, her husband, Roy Haney in 2004, her father and mother, Jake and Ada Hetterle, her brother Paul Hetterle, sister Rosella Schwartz, brother Lowell Hetterle. May she be remembered with love and compassion with God's Amazing Grace! A memorial service to celebrate Gloria's life will be held at 10:00 a.m. on February 5, 2018 at the Moser Funeral Service Chapel, 3501 S. 11th Avenue in Evans. A potluck will be held at the Ault V.F.W following the service for Gloria.

Gloria Haney, 79, of Greeley Colorado passed away at Centennial Healthcare, January 20, 2018. She was born April 17, 1938 in Greeley, Colorado to Jake Hetterle and Ada Florence (Miner) Hetterle. She grew up in the Gilcrest area. She attended... View Obituary & Service Information

The family of Gloria Haney created this Life Tributes page to make it easy to share your memories.

Gloria Haney, 79, of Greeley Colorado passed away at Centennial...

Send flowers to the Haney family.