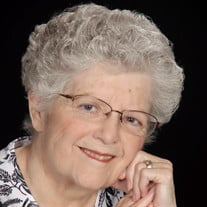 Gloria Ann Shoemate, 83, of Windsor, Colorado was welcomed into her Savior’s arms on March 25th, 2022. Gloria was born April 30, 1938, to Lee Gore and Catherine (Burke) Sallee in Amarillo, Texas. She married her high school sweetheart, Joe Shoemate, in 1956, and they were married for 56 years. They spent most of their life in Clovis, New Mexico, and moved to Evans, Colorado, in 2004. She most recently lived in Windsor, Colorado. Gloria had many interests and talents. She worked as a bookkeeper, dabbled in the tropical fish wholesale business, and opened a ceramics retail store with her mother. She was a gifted crafter. Gloria most recently attended Mountain View Evangelical Free Church in Greeley, Colorado, and as a young woman she taught Sunday School classes. Gloria is survived by her sons Robert (Linda) Shoemate of Windsor, Colorado, and Brian (Christine) Shoemate of Little Elm, Texas; grandchildren Samuel (Natalie) Shoemate, Nathanael Shoemate, Joanna (Matt) Daugherty, Ruth Shoemate, Abigail Shoemate, Michael Shoemate, and Matthew Shoemate; great-grandchildren Adelynn, Koda, and Raya Shoemate; and brother Verney (Sue) Sallee of Rogersville, Missouri. She is preceded in death by her husband Joe Shoemate; parents Lee Gore and Catherine Sallee; sister, Linda Perkins; and grandsons, Danyiel Shoemate and Benjamin Shoemate. “We are confident, then, and would prefer to be away from the body and at home with the Lord.” 2 Corinthians 5:8 Funeral services will be 10:30 a.m. Friday, April 8, 2022, at the Mountain View Evangelical Free Church, 6253 W. 28th Street in Greeley. Interment Lakeview Cemetery. Memorial gifts may be made to Samaritan’s Purse in Gloria’s name.

The family of Gloria Ann Shoemate created this Life Tributes page to make it easy to share your memories.

Gloria Ann Shoemate, 83, of Windsor, Colorado was welcomed into...

Send flowers to the Shoemate family.