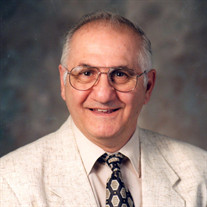 Gregory Peter Jannetta Jr., 81 of Greeley, Colorado, passed away on Sunday, September 3, 2017 at the Swedish Medical Center. He was born on May 10, 1936 in Duluth, Minnesota to Gregory Peter & Caroline (Jennetta) Jannetta. He graduated from Denfeld High School in Duluth in 1954. He later joined the Air Force where he served 30 years in the Minnesota Air National Guard achieving the rank of Master Sergent. Greg married Claudia Plucinak in 1959 and she passed away in 1988. He later married Marie Peterson in 1991. He was a member of Faith Lutheran Church in Johnstown, Colorado. He volunteered with the Friends of Baseball and was a member of the Good Times Car Club. Survivors include his wife, Marie Jannetta of Greeley; a son, Dennis Jannetta and wife Marie of Duluth; a step son, David Schmidt of Barnum, Minnesota; a step daughter, Catherine Siiter and husband Rory of Cloquet, Minnesota; a brother, Donald Jannetta and wife Susan of Greeley; a nephew, Nicholas Janetta and wife Sydney of Platteville, Colorado; 6 step grandchildren and 7 step great grandchildren. He is preceded in death by his birth mother, Caroline Jennetta; his father and adopted mother, Gregory and Florence Jannetta and a brother Rodney Jannetta. A memorial service to celebrate Greg’s life will be held at 11:00 a.m. on Friday, September 8, 2017 at the Faith Lutheran Church, 3999 W. South First Street in Johnstown. Memorial gifts may be made to the Faith Lutheran Church and they can be sent in care of Moser Funeral Service, 3501 S. 11th Avenue, Evans, Colorado 80620. An online obituary and guestbook are at www.moserfuneralservice.com

Gregory Peter Jannetta Jr., 81 of Greeley, Colorado, passed away on Sunday, September 3, 2017 at the Swedish Medical Center. He was born on May 10, 1936 in Duluth, Minnesota to Gregory Peter & Caroline (Jennetta) Jannetta. He graduated from... View Obituary & Service Information

The family of Gregory Peter Jannetta Jr. created this Life Tributes page to make it easy to share your memories.

Send flowers to the Jannetta family.