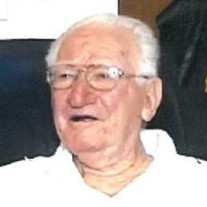 Harrison Herbert Hull, age 100, of Loveland, passed away Sunday, March 24, 2019, at Good Samaritan Loveland Village. He was born January 1, 1919, in Greeley to Herbert Hull and Clara Otie Myer. Growing up on a farm, Harry graduated from Greeley Central High School and attended Colorado State University for several years. He became a mechanic for Garnsey & Wheeler before joining the Army Air Corps in 1942. He served in the Pacific theater with the 501 Squadron of the 345th Bomber Group “Air Apaches” as a mechanic. Within a year he was promoted to Master Sergeant and worked as crew chief and became an inspector. Harry was trained stateside and then stationed briefly at Pearl Harbor and went to various ports in Australia. He was discharged in 1945. Returning to Greeley, Harry went back to work for Garnsey & Wheeler as a mechanic and later selling tractors, cars, and trucks where he had a 35+ year career. In 1946 he married Adeline Thornburg. They raised two sons, Kerry and Rickey. They later divorced. On March 22, 1974, Harrison married Bettie L (Fuller) Firestien. They spent over 25 years together, dancing, traveling, and enjoying their family. Finishing his career at Garnsey & Wheeler, he then worked for Weld County Garage selling cars and later at Weld County Job Services. In 1994 he retired so they could travel the country and enjoy camping and fishing. While living in Windsor he developed a love for his for horse and was seen riding around the neighborhood. In 1990 in honor of Windsor 100th birthday, he rode his horse and carried a copy of the original incorporation papers from Greeley to Windsor just as it had been done 100 years before. Survivors include a son, Rickey Dean Hull, and three daughters, Gail (Jerry) Harding, Lynn (Don) Rusch, and Lee Ann (David) Heldt. Grandchildren are Gwen Gouge, Jim Hull, Lisa Hull, Maria (Steve) Rosenbohm, Brandon Rusch, Jennifer Harding, Tannielle (Ken) Amick, Justin (Geri) Harding, Autumn Rusch, Mandee (Kurt) Hartshorn, April (William) Graves and Jourdan (Jesse) Reynolds. Great-grandchildren are Gwen’s family, Jim’s children, Quentin and Gavin Amick, Tyvin Harding, Jaden Rigg, Madilynn Watson, Maycee & Mckenzee Kohl, Dominic, Clayton, and Kylee Hartshorn, Ryan and Bradlee Graves, and Jaxson, Julia and Jaymee Reynolds, Dylan Rosenbohm. He was preceded in death by his wife Bettie, sister Arlene, and Son Kerry. On April 2, Interment will be held at Linn Grove Cemetery in Greeley at 9:30 A.M. and “Going Home” Celebration of Life services will be at 11:00 A.M. at Faith United Church in Windsor. Reception will follow. Memorial Donations may be made to Hearts & Horses in care of Moser Funeral & Cremation Service at 3501 South 11th Ave, Evans, Colorado, 80620.

The family of Harrison H. Hull created this Life Tributes page to make it easy to share your memories.

Send flowers to the Hull family.