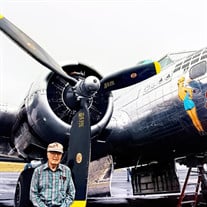 Henry George Trahan, 103, of Greeley, Colorado passed away on Saturday, June 13th, 2020 at Columbine West Health & Rehab. He was born May 20th, 1917 to George and Evelyn (Lachance) Trahan in Skinner, Maine. He was a graduate of Jackman High School in Jackman, Maine, and graduated from Coin Electrical School in Chicago, Illinois as well as receiving additional certifications at Aero ITI in Glendale, California. On October 7, 1941, he married Arlene L. Poulin in Glendale, CA. He worked for Lockheed Aircraft for over forty years. During WWII, he worked under special contract with the Army Air Corp., and after the war as a supervisor on the Lockheed Constellation and the P2V aircrafts. In 1960 he transferred to Lockheed in Sunnyvale, CA, where he worked on various aerospace industry projects for the Airforce and Navy including the Agena Satellite Systems and various Black World classified projects. George was a member of St. Mary’s Catholic Church in Greeley, Colorado. He was a member of the Lockheed Management Club and his hobbies included camping, traveling, and visiting with family and friends. With retirement, he and Arlene dedicated time to assisting the elderly. He was happily married to Arlene for more than 75 years. A life-long learner, George was well-informed about many topics and could discuss them at length. His dry sense of humor and quick wit would often catch people off-guard. He was a role model for all of his family in his integrity, kindness, and worldly curiosity. He is survived by his son and daughter-in-law, Richard and Marcy Trahan (Port St. Joe, FL), two grandchildren, Nicole Trahan and Jonathan and his wife Ashley Trahan, as well as two great grandchildren, Brooklyn and Weston Trahan, all of Greeley. He was preceded in death by his parents, George and Evelyn Trahan, his wife, Arlene Trahan, a brother, Lucien Trahan, and a sister, Antoinette (Toni) Nadeau. Private family services will be held at a later date. In lieu of any flowers, the family asks that a donation be made in George’s name to Habitat for Humanity.

Henry George Trahan, 103, of Greeley, Colorado passed away on Saturday, June 13th, 2020 at Columbine West Health & Rehab. He was born May 20th, 1917 to George and Evelyn (Lachance) Trahan in Skinner, Maine. He was a graduate of Jackman High... View Obituary & Service Information

The family of Henry George Trahan created this Life Tributes page to make it easy to share your memories.

Henry George Trahan, 103, of Greeley, Colorado passed away on...

Send flowers to the Trahan family.