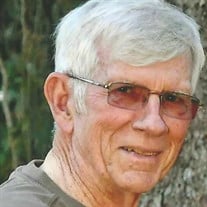 James Richard Clark, 84, of Greeley departed this life on September 18, 2021, at his home surrounded by his family who loved him dearly. Jim was born April 17, 1937, in Garden City, Kansas, to Hal and Evelyn Clark. He grew up in Bakersfield, CA, and got a degree in Civil Engineering from Fresno State University. He was drafted and served in the US Army from 1961 to 1963. He moved to Colorado in 1965 where he hiked all 54 of the state’s 14ers. Jim worked in the Water Resources Department for the State of Colorado for 31 years. His dream of having a farm was accomplished in 1977 and he raised cattle, corn, pinto beans, and alfalfa. More importantly, though, the farm is where he first met his treasured wife, Cynthia Kay Lewis. He married Cindy on September 19, 1981, and they had four sons whom they raised to love and serve Christ, work hard, and value family. Jim served the Lord faithfully and could often be found reading his Bible in the early morning hours. He was a current member of Summitview Community Church. He loved traveling, hiking, music, and spending time with his kids and grandkids. He is survived by his sister Marilyn Hutchins, sons Halden (Ginny), Caleb (Marlys), Daniel (Ashlie), David (Kaci), and 13 cherished grandchildren: Connor, Logan, Mailey, Chase, Evelyn, Naomi, Talitha, Eliana, Jane, Lochlan, Nathan, Killian, and Haisley. Jim was preceded in death by his parents Hal and Evelyn, his brother Bill, and his beloved wife Cindy. The memorial service will be held Saturday, Sept. 25, at 2:00 pm at Summitview Community Church, 801 37th Street in Evans. Jim valued Christian education, so in lieu of flowers, memorial donations can be made to the school that some of his grandchildren attend: Sutton Christian School; PO Box 321; Sutton, NE 68979. An online guestbook and obituary are available at www.moserfuneralservice.com.

James Richard Clark, 84, of Greeley departed this life on September 18, 2021, at his home surrounded by his family who loved him dearly. Jim was born April 17, 1937, in Garden City, Kansas, to Hal and Evelyn Clark. He grew up in Bakersfield,... View Obituary & Service Information

The family of James Richard Clark created this Life Tributes page to make it easy to share your memories.

James Richard Clark, 84, of Greeley departed this life on September...