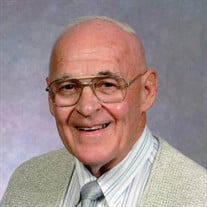 James W. Dunn, 89, of Greeley, passed away on Saturday, April 13, 2019 at his home. He was born October 15, 1929 to James Clyde & Verna Rose (Copeland) Dunn in Greeley. He was a 1947 graduate of Greeley High and went on to serve in United States Navy. He worked as a manager of the Pepsi Cola Bottle, Co, a salesman of mobile homes, and he then worked and retired from the U.S. Postal Service where he was a letter sorter. He is survived by his sons, Larry Steven and Jerry Dean Dunn, a brother, Robert Lowell, a sister, Mable Maurine Dunn Sadoian, 4 grandchildren, and 5 great grandchildren. He was preceded by his parents, James & Verna Dunn, and a brother Alvin Lloyd Dunn. A celebration of James’ life will be held at 11:00 a.m., Friday, August 9, 2019 at Moser Funeral Service Chapel. Memorial donations may be made to Auburn Crest Hospice in care of Moser Funeral Service, 3501 S. 11th Avenue, Evans, CO 80620.

The family of James W. Dunn created this Life Tributes page to make it easy to share your memories.

Send flowers to the Dunn family.