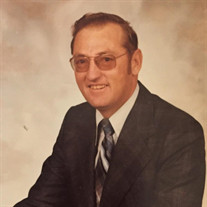 James Thompson Stewart passed away February 24, 2022, at his home in Greeley, Colorado at the age of 88. Jim Stewart was born to Edna Mae and Hack Stewart in Littlefield, Texas, October 24, 1933. Jim grew up and attended school in Littlefield, Texas. After leaving school he went to work for his Uncle Jess Taylor in Tribune Kansas. He met Donita Howell at church and they were married in Tribune, Kansas. They later divorced, Jim was drafted into the Army in 1955 and was sent to Fort Ord, California for basic training and was then shipped to Korea. He spent a tour of duty in Korea and then was rotated back to the states where he was released from the Army and returned to Tribune, Kansas. He later moved to Colorado where he worked in the Windsor Sugar Factory for two Campaign’s. He then moved to Leadville, Colorado where he worked at Climax Molybdenum Mine for eight years. He then moved to Greeley, Colorado where he joined the Greeley Police Department and served for 29 years, retiring in 1996. Jim was a life member of Greeley / Evans Moose Lodge #909, where he was a Past Governor. He received the Pilgrim Degree of Merit in 1993 at Mooseheart, Illinois. He was also a Past President of the Colorado Moose Association. He was a Past North Moose of Pikes Moose Legion #156 and was also a Perpetual member of the Corinthian Lodge #35 A.F. & A.M. in Leadville, Colorado. Jim was a life member of VFW Post #7521 in Tribune, Kansas as well as a member of the Eagles in LaSalle, Colorado. He was also a member of Weld County Fish and Wildlife and volunteered many hours with the Retired Senior Volunteer Program. Jim started dating Peggy Neuman in 1996 and they married June 5, 1999, and they enjoyed 15 great years before she passed away. Jim is survived by his son, Kenneth Stewart, his daughter, Debbie Day, and daughter-in-law, Jane Stewart, a brother, Andy Stewart and his wife Cindy, a sister, Venita Fankhauser and her husband Paul, stepsons, Chuck Neuman and his wife Celia, Eric Neuman and his wife Vicki, stepdaughter, Rhoda Newman and her husband Dave Hernandez, and numerous grandchildren and great grandchildren. He is preceded in death by his wife Peggy who died March 27, 2015, and son Gene Stewart who died December 18, 2015. Interment at Greeley County Cemetery in Tribune, Kansas. Memorial Service will be 11:00 a.m., Wednesday, March 23, 2022, at the Moser Funeral Service Chapel. A celebration of life will follow at the Greeley/Evans Moose Lodge #909.

James Thompson Stewart passed away February 24, 2022, at his home in Greeley, Colorado at the age of 88. Jim Stewart was born to Edna Mae and Hack Stewart in Littlefield, Texas, October 24, 1933. Jim grew up and attended school in Littlefield,... View Obituary & Service Information

The family of James Thompson Stewart created this Life Tributes page to make it easy to share your memories.

Send flowers to the Stewart family.