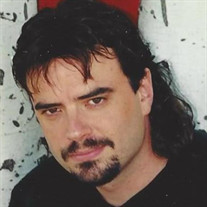 James Richard Vaughn 12/31/1968-04/24/2020 James, known to everyone as “Jim” or “Bo,” passed into the presence of his Lord and Savior, Jesus Christ, on April 24th, 2020. Jim was the son of Robert Vaughn and Patricia Huggins Vaughn. He was born in Saranac Lake, New York, just minutes after the birth of his twin sister, Jill. The family included an older sister, Brenda, and a younger sister, Stephanie. It became obvious very early in his life that Jim was an extremely talented musician, artist, and athlete. During his senior year at Saranac Lake High School, he was named the best high school drummer in the entire state of New York. Prior to graduation, Jim was asked to paint a mural on the main hallway in the high school; that mural is still in place, 33 years later. In his teens, Jim began studying the martial arts. He earned a first-degree black belt in Ashinki-do and a third-degree black belt in Tae Kwon Do. He went on to teach martial arts for more than twenty years, retiring only when a spinal-fusion surgery prevented him from continuing. Jim proudly served in the Army’s 10th Mountain Division in upstate New York. He designed and crafted the sign that stands at the entrance of the 10th Mountain Division Company A 2/108th Light Infantry National Guard Base, Ft. Drum, New York. In the mid-1990’s, Jim moved to Colorado, where he continued to teach the martial arts. He and two great friends, Michael Riggs and Woody Hambrick, co-founded the Colorado Cougars, a semi-pro football team, the logo for which Jim designed. Jim played quarterback and was the offensive coordinator. At this time, Jim and several of his friends also worked as bounty hunters. Eventually multiple injuries forced Jim to turn to more sedentary pursuits. He loved making home movies with his friends, playing the drums at church, and teaching himself Russian and Spanish. He was constantly teaching. Whether that be providing painting lessons for the children at church, coaching a middle school football team, teaching martial arts for self-defense, Jim loved to learn and loved to share with others. Jim developed an interest in Texas Hold-em poker, and quickly became extremely proficient, winning multiple local and regional tournaments, occasionally taking trips to Las Vegas to play poker with a group of his friends. He wrote a book, Monkey-Poker, which he was in the process of publishing. Jim and a group of great friends began playing Texas Hold-em weekly. They had been playing every Sunday night for more than fifteen years when COVID-19 forced them to temporarily move their game online. In 1999, Jim met Pamela Collins of Eaton. They married exactly seven months to the day that they met. Pamela’s family loved Jim dearly. Last October they celebrated their 20th anniversary. He was a wonderful, loving, godly husband. Despite Jim’s multiple talents and adventures, the most important thing in his life was his faith in Jesus Christ. Everyone who knew him knew what he believed. He would readily tell you that God had orchestrated situations in both his life and Pamela’s in order to bring them together, when otherwise they would never have met. Jim fought a 35-year battle with Bipolar Disorder, Traumatic Brain Injuries, and chronic pain, yet through it all, he held onto his Lord, trusting that God had a plan for everything. It was Jim’s greatest desire that God be glorified through his life. Pamela, Jim’s many friends, and his family will miss Jim terribly. However, they take great comfort in knowing that today Jim is in the presence of His Lord and will one day be reunited with his loved ones who have also accepted Christ as their Savior. Jim was preceded in death by his father, Robert Vaughn; maternal grandparents, Leon and Frances Dunn; maternal grandfather William Huggins, Sr.; paternal grandparents William and Violet Vaughn; aunt, Alice Huggins; uncles, Tom Huggins and Lionel Vaughn; all of New York. He was also preceded in death by grandparents-in-law, Roy and Elvera Carlson of Galeton, CO; and his treasured “four-legged children”: Bug, Bubba, and Tehya. Jim is survived by his wife, Pamela Collins Vaughn of Evans; mother, Patricia Vaughn of Saranac Lake, NY; sisters, Brenda (Troy) Garver of Saranac Lake, NY; Jill Vaughn Eden of North Fort Myers, FL; and Stephanie (Trevor) Paton of Woodstock, NY; parents-in-law, Charles “Oz” and Ruth Collins of Eaton, CO; brother-and-sister-in-law, Jeff (Denise) Collins of Granite Canyon, WY. Nieces Alison (Aaron) Mones of Woodstock, NY; Stephanie (Ethan) Kenney of Sarasota, FL. Nephew Evan (Courtney) Paton of Woodstock, NY. Uncle Pat and Aunt Leda Huggins and family of Plattsburgh, NY; Aunt Karen Thornquist and family of Wellesly Hills, MA; Uncle Bill and Aunt Holly Huggins of Gabriels, NY; Uncle Loren and Aunt Judy Vaughn of Saranac Lake NY, and many cousins. The list of Jim’s “family” would not be complete without including friends Michael and Michelle Riggs and family, of Yoder, CO; Brian and Amber Palcer and family of Parachute, CO; the Sunday Night Poker Club members; and his Mountain View Evangelical Free Church family. In lieu of flowers, memorial contributions may be made to Mountain View Evangelical Free Church, 6253 W 28th Street, Greeley, CO; Living Water Baptist Church, 9 Locust Street, Champlain, NY 12919; or to the Kindness Ranch Animal Sanctuary, 854 State Highway 270, Hartville, WY, 82215. Friends are welcome to a Celebration of Life service at Mountain View Evangelical Free Church on Friday, August 7th, at 10:00 a.m. Please wear a mask; COVID-19 restrictions and social distancing will be maintained.

The family of James Richard Vaughn created this Life Tributes page to make it easy to share your memories.

James, known to everyone...

Send flowers to the Vaughn family.