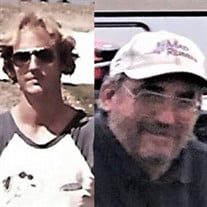 James R. “Jim” Wach was born March 29, 1957 to John and Evelyn (Janne) Wach in Greeley, CO, and passed away August 23, 2020. A lifelong resident of the Greeley-Evans area, he graduated from Greeley West High School in 1975, where he was on the tennis and basketball teams. After high school, he served a brief stint in the Navy on the USS David R. Ray. After the Navy, he worked several places, until he found his passion as a master finish carpenter, eventually forming Bruckmeier-Wach. Later he landed at Growling Bear Construction, where he worked for over 20 years, until an old basketball injury cut his career short. After 2 years of pursuing and a 9 year relationship, he married Debbie Kaiser in June 1999. She passed away in 2005, but remained the love of his life. Jim loved the outdoors, pursuing many hobbies including hunting, fishing, waterskiing, hiking and golfing. His favorite time of the year was the annual hunting trip to Walden with “the guys.” He was a voracious reader and had a huge love for music. He enjoyed a good joke, a good prank, and a good story. In 2015 complications from that old injury resulted in a double amputation, but Jim continued to amaze everyone with his will to live as normal a life as possible. The method may have changed, but the hobbies did not. He continued to live independently, do some woodworking, play pool and mow his lawn. His positive attitude was an inspiration. We are comforted knowing he is now living a life that once again includes Debbie and the opportunity to do all the things he loved without the restrictions of a wheelchair. Jim is survived by his sister Leslie (Ron) Heinz of Greeley, his brother Dan (Roxanne) of Omaha, NE, nephews Matt Heinz of Laurel, MT, Robert Heinz of Greeley, Ronald Heinz of Eaton, Rodney Heinz of Ault and niece Shala Turner of Black Forest. He also leaves countless longtime friends, many who have known him for fifty years or more. No public services are planned. In lieu of flowers, if you are so inclined, you may donate to the Humane Society of Weld County or the charity of your choice and spend some time outside and think of Jim.

The family of James Robert Wach created this Life Tributes page to make it easy to share your memories.

Send flowers to the Wach family.