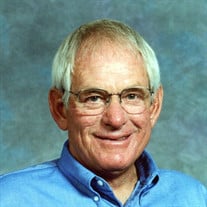 Jan L. Williams, 76, of LaSalle, Colorado, passed away quietly and peacefully into the arms of our Lord on Tuesday, April 14, 2020. He was born February 1, 1944 to George Vernon & Helen Margaret (Moore) Williams in Denver, Colorado. After high school, Jan worked for the Union Pacific Railroad and then went on to own and operate Welco Spray and Cattle Washing. Later, he did over the road hauling for Monfort & BMC and finally drove for School District RE-1. Busing kids to Sierra School was one of his favorite jobs. It gave him worth and purpose again. On December 3, 1994, he married Carol Brown Nero and they resided in LaSalle; a home they gutted and remodeled. Jan had belonged to the Doberman Dog Club. He owned Goldwing motorcycles and took many road trips in the 70’s and 80’s. He also owned his own plane until the mid 80’s. He was a member of the First Christian Church. Jan is survived by his wife, Carol Williams, a stepson Nick (Krista) Nero, stepdaughters, Sheila (Tim) Croissant and Shelly (Jude) Ackerman, a sister, Karen (Frank) Vannest, 7 grandchildren; Katie (Ryan) Magnuson, Sallie Croissant and Nate Bailey, Bailey, Carter, and Cole Nero, Aiden and Colton Ackerman, a niece, Kimberly Vannest and son, Ralph, a nephew, Kevin (Kris) Vannest and their children, Peyton and Owen, many cousins from the Coffey family and the Lea family, and the many special friends, especially Roy and Crystal Harris and family, Connor and Samantha. A Celebration of Jan’s life will be held 10:00 a.m. on Saturday, July 25, 2020 at the Moser Funeral Service Chapel, 3501 S. 11th Avenue in Evans. Memorial contributions may be made to Pathway Hospice or the Sierra School in care of Moser Funeral Service.

Jan L. Williams, 76, of LaSalle, Colorado, passed away quietly and peacefully into the arms of our Lord on Tuesday, April 14, 2020. He was born February 1, 1944 to George Vernon & Helen Margaret (Moore) Williams in Denver, Colorado. After... View Obituary & Service Information

The family of Jan L. Williams created this Life Tributes page to make it easy to share your memories.

Send flowers to the Williams family.