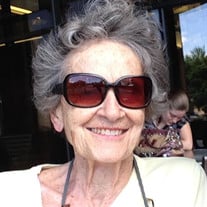 Jean Anne Sabin 10/10/1922 - 7/24/2018 Jean Anne Hudspeth Sabin was born October 10, 1922 in Denver to Lela L (Rhoades) and Raymond J Noone. After several bouts with cancer, she passed away on 7/24/18 at “The Bridge” assisted living community in Greeley CO surrounded by family. Jean Anne attended Catholic schools in Denver for 12 years, specializing in dance and performing with the Denver Grand Opera prior to attending Colorado State University for an education in nutrition. She worked during the depression to cover college costs and, while working at the Student Union, met veterinary student Phil K Hudspeth of Pueblo and they married in 1944. They moved to La Junta and started the Valley Veterinary Clinic where Jean Anne became a vet assistant, working everything from anesthesia and injections to appointments and phone calls. Over the next 18 years, Jean Anne and Phil had six daughters and a son. “PTA Forever!” she often said, and worked with both Catholic and public schools for the next thirty years, volunteering in libraries, serving school meals, helping in classrooms, Girl Scouts, Tigershark swimming, Kids’ Rodeo and all activities of her children and their friends. To escape the constant call of veterinary life, she and Phil purchased a cabin in the mountains on the Rio Grande and spent time fishing and snow skiing. Defined by an active life of gourmet cooking, sewing, gardening, dance and exercise classes, Jean Anne and Phil spent so much time traveling, especially to Europe and Mexico, they started La Junta’s first travel agency and became their own best customers. Part of a very active social group, Jean Anne was an event-planner extraordinaire, from after-tennis get-togethers to costume parties and large yard-parties. She enjoyed them all. Phil passed away unexpectedly in 1974 and Jean Anne became a single-parent. In 1978, Jean Anne married long-time friend Robert (Bud) Sabin, and her family became nine children and eleven grand-children. “Fishing at 30, skiing at 40, tennis before 50, why not golf at 60?” They traveled to Europe, Mexico, the Orient and took cruises until Bud passed away in 1998 after a period of illness. Jean Anne’s style? Skydiving for her 83rd birthday and teaching senior exercise classes into her 90s. Always choosing her own destiny, Jean Anne moved to Evergreen Gardens in La Junta when she no longer wanted the upkeep of a large home. She continued her life-long activities with several church groups, community groups including recognition as a Sunshine Award recipient and socially, the “Friday Night Club” gathering, usually in the company of life-long friend John R Stewart. A big supporter of all the arts in La Junta, she was one of four women who began the Picketwire Players Patron’s group. Requiring more help because of declining eyesight, she chose to move to Greeley and began growing her facebook reputation as “Oma out-on-the-town” with her children, grandchildren, great-grandchildren and great-great-grandchildren. To the end, Jean Anne lived up to one of her own mottos: “Work Hard. Play Hard.” The legacy she leaves today is inestimable. Jean Anne is survived by her nine children and step-children: Robert “Bob” (Kathy) Sabin of New Mexico, Lee Ann (Ed) Gottfried of Montana, Jerry Ann (Alan) Heath, Polly (Dr. Tom) Venard, Chris (Wayne) Gentry, Jaime (Jeff) Bailey, and Phil “Gigot” (Eli) Hudspeth, all of Colorado, Kerry (Harry) Tobias of California and Melanie (Dan) Myron of Wyoming. She is survived by 21 grand-children, 32 great-grandchildren and 3 great-great grandchildren. A Memorial Mass will be held Saturday, August 18th at 9am at Our Lady of Guadalupe/St Patrick Parish with Father Henry Wertin and Msgr James Koenigsfeld officiating. A celebration of her life will take place the previous evening, Friday August 17th at 6pm in the parish hall. In lieu of flowers, Memorial Contributions may be made to the Koshare Indian Museum, The Otero Museum or the Picketwire Players or the charity of your choice. Online condolences and best memories may be left at www.PeacockFH.com or www.moserfuneralservice.com.

The family of Jean Anne Hudspeth Sabin created this Life Tributes page to make it easy to share your memories.