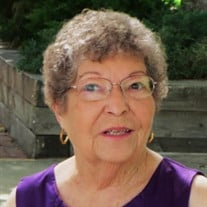 Jeanette Mae Jacks, age 85, passed away peacefully May 27, 2021 while surrounded by family after a long fight with cancer. Born May 18, 1936 in Northwood, Iowa to Ralph Dishon and Bertha (Kruse) Dishon. She attended schools in Mason City, Iowa and graduated in 1955. On July 23, 1955, she married Larry Lee Jacks in Mason City. Together they had three sons and one daughter. She was a stay-at-home mother until all her children were in school. She worked at Carroll George Mfg. and was a dispatcher for the Worth County Sheriff office in Northwood. In 1982, Larry, Jeanette, and her youngest son moved to Eaton, Colorado. In 1984, she started working for Eaton Drug Store until she retired in 2006. She enjoyed trips to Iowa and Texas. She treasured and loved spending time with her grandchildren and great grandchildren. She loved to raise roses and going out for lunches and shopping trips with her friends. She was the loving and devoted mother of Larry Michael (Doreen), Doug (Marijo), Rebecca Jacks, and Brad (Tracy). A proud grandmother of Kris Jacks (Ashleigh), Kortnie Ketler (John), Jeremy Jacks (Lacie), Joshua Jacks, Don Jacks, Amanda Cook (Brian), Janelle Jacks (fiancé Trevor), Megan Jacks (fiancé James), eleven great grandchildren, and special friend, Doris Brown. She was preceded in death by her devoted husband, Larry (2008), sister Marcele and spouse, Bill Jensen, and her parents Ralph and Bertha Dishon. A visitation will be 4:00-7:00 p.m. at the Moser Funeral Service Chapel, 3501 S. 11th Avenue in Evans, Colorado. Funeral services will be 10:30 a.m. also at the funeral home. Interment Eaton Cemetery. Memorial gifts may be made to The Manor at Bonell Good Samaritan Center.

Jeanette Mae Jacks, age 85, passed away peacefully May 27, 2021 while surrounded by family after a long fight with cancer. Born May 18, 1936 in Northwood, Iowa to Ralph Dishon and Bertha (Kruse) Dishon. She attended schools in Mason City,... View Obituary & Service Information

The family of Jeanette Mae Jacks created this Life Tributes page to make it easy to share your memories.

Send flowers to the Jacks family.